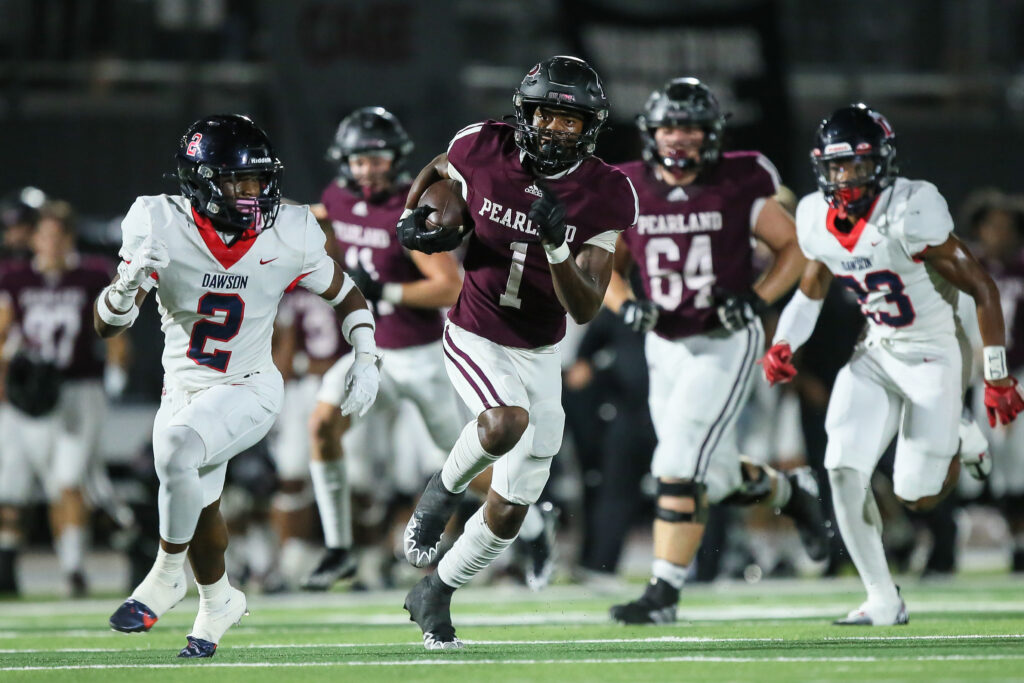 PEARLAND TOUCHDOWN - Pearland sophomore QB Jackson Hamilton tossed a short pass to junior WR Patrick Bridges (1) at the Dawson 46, and he turned on the jets to weave his way to the goal line to complete the 51-yard throw and catch for the score to cut the lead to 14-7 which stood at intermission. (Photo by Lloyd Hendricks)

The 9th Annual Bayway Chevrolet PearBowl had all the bells and whistles in anticipation of this clash between the Pearland cousins — the Dawson Eagles and the Pearland Oilers.

The two teams entered the district contest with the series tied 4-4 so the winner would take the traveling PearBowl trophy and the series lead — at least for another year.

The festivities began with the Bayway Chevrolet Parachute Team flying into Pearland ISD Stadium with the Game Ball, Texas Flag, and the American Flag to the delight of the thousands of fans from both schools who had packed the stadium.

Both teams have their sights set on advancing to the playoffs. Though both teams had the same regular season record at 3-3, Dawson had the better district mark at 3-0 while Pearland was 2-1 coming into the game.

Neither team scored on their first possessions of the game, but Dawson found their rhythm on offense on their second possession as they drove 53-yards in 6-plays to score when junior running back Gage Green found pay dirt on a 6-yard run. Sophomore kicker Ayden Treadaway booted the PAT making the score 7-0 with 5:24 remaining in the opening quarter.

The Eagles made it 14-0 with 11:46 left in the second quarter when junior running back Bryce Burgess took a handoff from senior QB Colin Johnson and raced 18-yards for a score. Treadaway nailed the PAT.

Pearland finally got on the scoreboard at the 8:06 mark of the second frame when sophomore QB Jackson Hamilton tossed a short pass to junior WR Patrick Bridges at the Dawson 46 and turned on the jets to weave his way to the goal line to complete the 51-yard throw and catch for the score to cut the lead to 14-7 which stood at intermission. Jackson Stagg booted the PAT.

The Oilers did cross the red zone late in the second quarter when they drove from their own 38 to the Dawson 14 only to lose a fumble which was recovered by Dawson junior Gabriel McFarland to close out the first half.

Dawson scored their only touchdown in the second half with 6:58 left in the third quarter when Burgess scored on a 6-yard run to make the score 21-7. The scoring drive covered 12-plays and 69-yards.

The Oilers could not get any consistent offense in the second half as a result of a strong defensive effort by the Eagles.

Pearland finally made a touchdown late in the fourth quarter when Hamilton threw a perfect pass to LaDamion McDowell down the center of the field that covered 41-yards for the score. The PAT was good by Stagg and the Oilers cut the lead to 21-14.

Dawson received the ensuing kickoff and Pearland was unable to get the ball back from the Eagles’ offense as they ran out the clock to get the 21-14 win.

“You got to give Coach Allison and his team credit. They played a clean game and made the plays necessary on both offense and defense when they needed to,” Pearland head coach B.J. Gotte said. “In a close game, when you fail to execute and turn the ball over in the red zone, it will be a struggle to beat good teams.

“We have a great opportunity to work on securing a playoff spot this week, so we need to turn our attention to a very talented Alief Taylor team. It is important that we grow from last week’s experience and continue to take steps in the right direction as a program.”

Leading the Dawson offense was Johnson who was 15-for-22 passing for 201 yards.

Bryce Burgess had 26 carries for 108 yards and two touchdowns.

Jaeden McCleskey had three catches for 69 yards, Joseph Brown had seven grabs for 49 yards, and Josh Gillis-Harry had two catches for 48 yards.

Pearland was led by Hamilton who was 8-for-16 passing for 168 yards and two scores.

McDowell had 13 carries for 41 yards rushing while catching two passes for 61 yards and one score.

Bridges had five grabs for 102 yards and one TD.

Dawson will face Shadow Creek on Friday, October 21 at 7:00 p.m. at Freedom Field. Both teams enter the game with 4-0 district records and this game will more than likely determine who wins the District 23-6A championship.

Pearland will host the Alief Taylor Lions in a critical district matchup as both are battling for a spot in the post-season. The game will be at Pearland ISD Stadium on Friday, October 21 at 7:00 p.m.