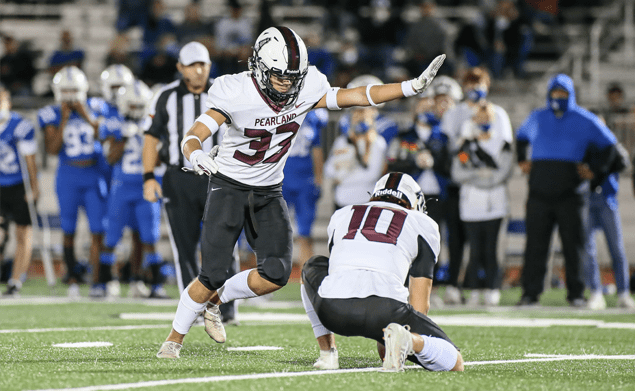 RIGHT ON TARGET - Pearland senior placekicker Caleb Mendez (33) booted field goals of 35, 40, and 37-yards plus 5-for-5 PATs in sparking the Oilers over Clear Springs 44-37 in the Class 6A Region III Div. I bi-district round of the playoffs. Issac Sanchez (10) is the holder. Pearland will face Atascocita on Friday, December 18 at 7:00 p.m. at Sheldon ISD Panther Stadium. The Eagles are 6-2 overall and defeated Pasadena Dobie 54-14 to advance to face the Oilers. (Photo by Lloyd Hendricks)

Pearland head coach Ricky Tullos has had three winning seasons since taking over the helm of the Oilers football fortunes in 2018.

In 2019, Pearland finished 8-2 during the regular season, but fell to the Gators again (28-23) in the bi-district round of the post-season.

As crazy as the 2020 season has been with the COVID-19, Pearland finished the season 7-2 and third place in the District 23-6A race, but Pearland snapped their three-game losing streak in the playoffs (dating back to 2017) to hang on to a 44-37 win over a talented Clear Springs (District 24-6A champions) squad to improve to 8-2 and advance to the area round of the 6A Region III Div. I playoffs.

Pearland will face Atascocita on Friday, December 18 at 7:00 p.m. at Sheldon ISD Panther Stadium. The Eagles are 6-2 overall and defeated Pasadena Dobie 54-14 to advance to face the Oilers.

Meanwhile, the Oilers faced a strong and talented Clear Springs team that won the District 24-6A crown.

Pearland set the tone early to build a big lead, but had to avoid a strong comeback effort of the Chargers to hold on to a 44-37 bi-district win.

Tullos opted to use placekicker Caleb Mendez in the first quarter as two Pearland drives stalled deep in Charger territory. Mendez was up for the challenge and drilled two field goals in the first quarter. Mendez hit a 35-yarder with 9:19 left in the opening period for a 3-0 lead and booted another covering 40-yards with 1:54 left in the first frame for a 6-3 lead after Clear Springs had kicked a 28-yard field goal to tie up the game 3-3.

Mendez would step up again in the second quarter and drill a 37-yarder with only six seconds left before intermission to give the Oilers a 30-10 halftime advantage.

Pearland junior QB Jake Sock had his best passing game of the season as he hit 11-of-21 passing for 214 yards and three touchdowns.

Two of the scores came in the first half as Sock hit William Foster for a 68-yard scoring strike and also found Foster again for a 46-yard scoring pass.

With 8:08 left in the second quarter, RB Darius Hale got loose on a 76-yard scoring jaunt. Mendez hit three PATs in the first half giving the Oilers a 30-10 halftime lead.

Clear Springs managed to get one score in the second period when QB Luke Sampson hit Noah Thomas on a 60-yard score.

Pearland scored once in the third quarter on a5-yard scoring toss from Sock to Dylan Dixson. Mendez added the PAT giving the Oilers a 37-10 lead.

But Clear Springs wasn’t going to go away as the Chargers scored 27 fourth quarter points as the second half became the Luke Samson show.

The signal-caller scored on runs of 1 and 3-yards while firing touchdown strikes of 12 and 75-yards.

The difference in the outcome came as a result of an Izeal Jones interception late in the fourth quarter.

With 4:42 left in the game, the junior defensive back came up with the big interception and returned it for a 58-yard pick-6 that gave Pearland a 44-24 lead.

Sampson scored on a 3-yard run with 3:29 left in the game to cut the lead to 44-30 while missing the two-point conversion.

The Chargers quickly got the ball back and found the end zone again on a 75-yard short pass and run through the Pearland defense to cut the margin to 44-37 with 2:45 still left in the game.

Clear Springs attempted an onside kick that was recovered by the Oilers. Three plays later, Pearland was forced to punt and made a critical mistake as the center snapped the ball over the punter’s head at the Pearland 23 with less than 15 seconds left to go in the game giving the Chargers a chance to score.

On the final play of the game, a pass by Clear Springs in the end zone fell incomplete and the Oilers began to celebrate their first playoff win in four years.

Hale led the ground attack for the Oilers with 15 carries for 117 yards and one TD. Serna had 28 totes for 86 yards.

Foster had five catches for 159 yards and two TDs.