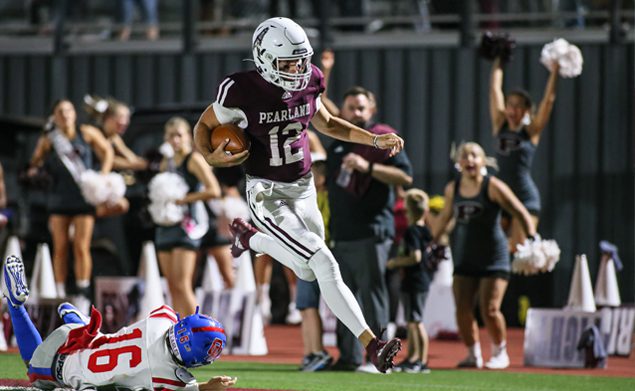 EXCLAMATION POINT - Pearland senior field general Jake Sock (12) provided the knock out punch against Oak Ridge with 5:24 left in the game with a stunning 48-yard keeper for a touchdown making the score 36-33 that stood as the final margin of victory for the Oilers. Pearland is idle this week, but will host Strake Jesuit on Friday, September 24 at The Rig at 7:00 p.m. as District 23-6A action begins. The Oilers are 1-2 on the season. (Photo by Lloyd Hendricks)

The 2021 football season has been a challenge for the Pearland Oilers as they have had to overcome injuries to key players while also trying to rebuild a young offensive line.

Facing an 0-3 start against the Oak Ridge War Eagles, the Oilers needed to have some players make some key plays that would put them on the winning path.

While the Pearland defense kept the Oilers in the game, the two players that would step up was a senior quarterback and a freshman signal-caller, both, of which, would be key players in the win.

Freshman quarterback Jackson Hamilton came in to guide the Oilers on a couple of scoring drives while senior field general Jake Sock provided the knock out punch with 5:24 left in the game with a stunning 48-yard keeper for a touchdown making the score 36-33 that stood as the final margin of victory.

Oak Ridge jumped out to a 7-0 lead with 3:43 left in the first quarter, but the Oilers countered with a 3-yard run by Kennedy Lewis to knot up the score 7-7 at the end of the period. Lewis’ touchdown was set up by a sensation 82-yard run on the ensuing kickoff with 3:24 left in the first frame.

The War Eagles got a safety at the 8:16 mark of the second quarter to take a 9-7 lead and increased the margin to 16-7 on a 9-yard scoring toss from QB Ethan Rodriguez to WR Jaquale Harrison with 5:30 remaining in the first half.

But the Oilers cut the lead to 16-14 at halftime when senior running back Dominic Serna got loose on a 28-yard scoring dash with 3:26 left before intermission.

Oak Ridge scored first to begin the second half on a 28-yard scoring pass from Rodriquez to Jahron Jones with 6:02 left in the third quarter making the score 23-14.

It took less that two minutes for the Oilers to answer as Hamilton found Isaac Sanchez open on a 42-yard scoring strike making the score 23-21 with 4:15 left in the third.

After Oak Ridge booted a 34-yard field goal to make the score 26-21, Pearland immediately responded when Izeal Jones returned the ensuing kickoff 75-yards for a touchdown to give the Oilers their first lead of the game after Sock completed a pass to Sanchez for the two-point conversion making the score 29-26.

With 6:33 left in the back-and-forth non-district contest, the War Eagles found paydirt with 6:30 left in the fourth period on a 34-yard scoring run by Larry DeBose to retake the lead 33-29.

That’s when Sock put the dagger in the heart of the War Eagles with his 48-yard scoring dash that gave Pearland the exciting 36-33 victory.

Sanchez led the Oilers in receiving with 82 yards and one score on seven catches.