Pearland rallies to move past Memorial 21-17 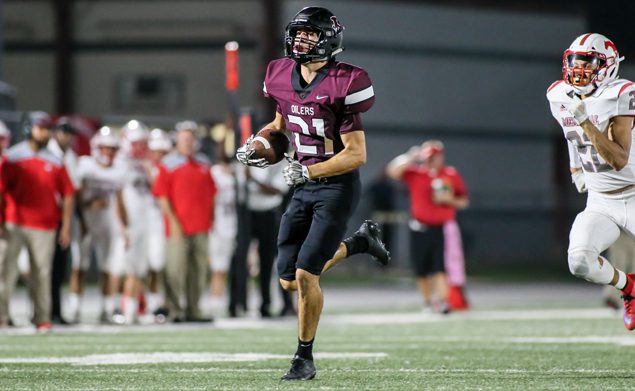 Pearland wide receiver Clayton Broeder (21) grabs a pass from QB J.D. Head and turns it into a 56-yard scoring pass to cut the Memorial lead to 17-14 with 10:05 left in the final quarter. The No. 9 area-ranked Oilers would score the winning TD on a 3-yard run by Austin Landry to pull out a 21-17 non-district win to improve to 2-0 on the season. (Photo by Lloyd Hendricks)

For the first three quarters against the Memorial Mustangs, the No. 9 area-ranked Oilers weren’t operating on all cylinders. Despite the slow start, the Oilers were still able to hand new Pearland head coach Rick Tullos his overall 90th career win.

Memorial took advantage of some of Pearland’s miscues on offense and defense to jump out to a 7-0 lead with 1:24 left in the opening quarter when Memorial scored on an 8-yard pass play.

Pearland began their first scoring drive at their own 37 following the ensuing kickoff and finally found some offense as running back Torrance Burgess scored on a hand-off and sped 24-yards for a touchdown, but the missed PAT left Pearland trailing 7-6 with 11:17 left in the second quarter.

The scoring drive was sparked by a 14-yard run by quarterback J.D. Head to set up the ball at the Memorial 24.

With 3:01 left before intermission, Memorial scored again on 9-yard run by Wilson Carrell to give the Mustangs a 14-6 advantage. The scoring drive completed an eight-play, 84-yard scoring drive with a 34-yard pass completion to the Pearland 13 being the key offensive play as the Oiler defense left the Memorial receiver wide open.

After Pearland went three-and-out, Memorial set up their next possession at the Oilers 47 with 2:26 left in the second quarter.

A 21-yard pass completion moved the ball to the Pearland 20 after another mix-up on coverage. Pearland’s defense stiffened, but the Mustangs still managed to score on an 18-yard field goal as time expired in the first half to grab a 17-6 lead at the half.

The Oilers took the second half kickoff and started at their own 40. The offense drove 14-plays to the Memorial 1-yard line, but came up short on fourth down leaving the score 17-6 in favor of the Mustangs.

Memorial quarterback Wilson Carrell scrambled 19 yards to the Oilers 22, but two-plays later, after a 10-yard holding penalty, Carrell threw an interception that was picked off by Austin Landry at the Pearland 29.

The Oilers set up at their own 29, but eight-plays later were forced to punt.

Memorial was unable to move the ball and punted the ball back to Pearland at their own 30.

It took only two plays for Pearland to find the end zone as Head hit Clayton Broeder who turned the catch into a 56-yard scoring pass. Head hit Andrew Moore for the 2-point conversion to close the gap to 17-14 with 10:05 left in the final frame.

The Pearland defense finally found their momentum and took control of the final period forcing a punt, an interception by senior Devin Linton and a game-ending fumble recovery by sophomore Kelekolio Linton.

The winning score for Pearland came on a 3-yard pass from Head to Landry. The PAT by Caleb Mendez found the mark and the Oilers had a 21-17 lead with 6:12 left in the game that would stand till the end.

Pearland finished with 389 total yards while Head was 20-of-27 passing for 200 yards and two touchdowns and also had seven totes for 26 yards.

Burgess led the ground attack with 13 carries for 85 yards and one score while Jaelin Benefield had 10 carries for 66 yards.

Broeder led the receivers with 83 yards on five grabs and one TD. Landry had six catches for 45 yards and one score. Jaden Piece had five catches for 37 yards.