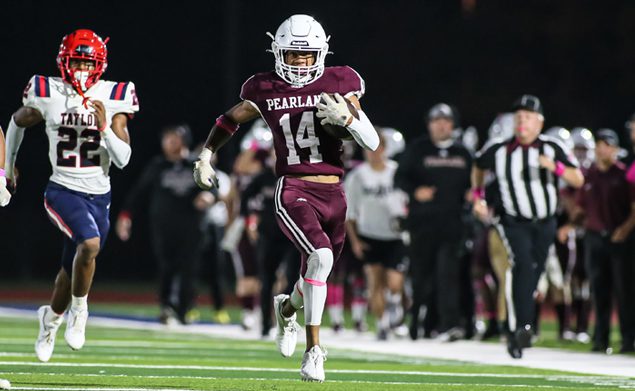 GAME CHANGER - Pearland junior wide receiver Christian Pitts (14) had a huge impact on the game with Alief Taylor as he had one carry for 76 yards rushing and six catches for 88 yards and two touchdowns in a key role in the Oilers' 36-30 comeback victory over Taylor. (Photo by Lloyd Hendricks)

With only 6:42 left in the game and trailing 30-14 to the Alief Taylor Lions, things looked bleak for the Pearland Oilers who had not had a great showing for the first three quarters.

“Our kids were staring adversity in the face down 16 points and responded with our backs against the wall,” Pearland head coach Ricky Tullos said.

It took only 1:16 for the Oilers to cut the lead in half as they went 64-yards in six-plays capped off with a 20-yard scoring strike from QB Jake Sock to WR Izeal Jones. Sock found Christian Pitts for the two-point conversion making the score 30-22 with 5:26 remaining in the game.

The Pearland defense did their part in forcing a three-and-out and a punt by the Lions.

Starting at their own 14, Pearland got a big pass completion from Sock to Pitts covering 57 yards to the Lions 29.

Pearland took five more plays to find the end zone on an 11-yard touchdown pass from Sock to Pitts to cut the lead to 30-28 after a failed two-point conversion attempt with 1:31 remaining and starring defeat in the face.

The Lions got a tremendous punt that was killed at the Pearland 4-yard line with 1:05 left in the fourth quarter.

Sock hit Pitts for a pass completion to the Oilers 21 and then Sock connected with Jones to the Pearland 46 with 46 seconds left in the game.

Sock found Jones open again moving the ball to the Taylor 35 with 38 seconds remaining in the game.

Dominic Serna was on the receiving end of a Sock pass to the Lions 6-yard line with 21 seconds showing on the clock.

With 17 seconds left, Sock hit Pitts on a 6-yard scoring pass in the left corner of the end zone to take the lead and complete a 96-yard, six-play game-winning drive making the score 36-30 which would stand as the final score.

The game would end when Pearland recovered an onside kick.

“In the fourth quarter, we were able to clean up and eliminate the mistakes and execute at a higher level. We also showed a great deal of poise and composure,” Tullos said. ” We are so proud of their effort and resiliency throughout the game.”

The Oilers scored on their first possession of the game sparked by a sensation run by a 76-yard run by Pitts from the Pearland 22 to the Taylor 2.

That would be the only points Pearland would get in the first half as Taylor scored 13 points in the second quarter for a 13-7 halftime lead.

Both teams would score a touchdown in the third as Serna scored on a 1-yard run.

Sock was 16-of-28 for 314 yards and three touchdowns while rushing for 44 yards on 10 carries and another score.

With the win, the Oilers secured their 22nd straight playoff spot this season. Pearland hasn’t missed the post-season since 1999.