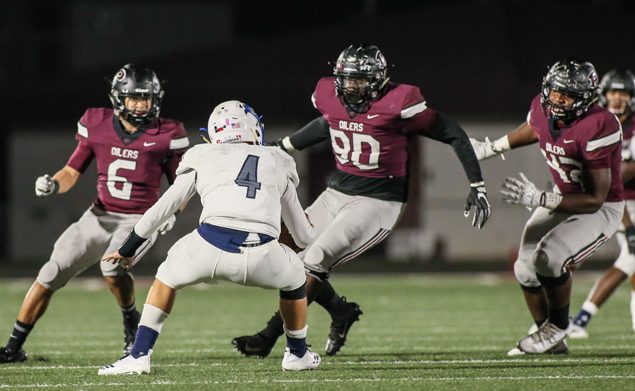 NO PLACE TO GO - The Pearland defense has played stellar all season as seen on this play against Brazoswood when Bucs quarterback Lane Caballero (4) found himself surrounded by Pearland's Devin Linton (6), Tre'Vonte White (90), and Isaiah Iton (42) that resulted in loss yardage. Brazoswood was held to only 27 yards rushing and 180 total yards in the 55-7 district beat down. (Photo by Lloyd Hendricks)

The Pearland Oilers remained undefeated as they blew out Brazoswood 55-7 at The Rig in their final home game of the regular season to improve to 9-0 overall and 6-0 in district. The win guarantees at least a share of the District 23-6A championship for first-year head coach Ricky Tullos and his team.

The Oilers can claim sole possession of the title with a win over the George Ranch Longhorns on Friday, November 9 at Traylor Stadium. Tullos is the former head coach at George Ranch and led them to the Class 5A Div. I state title in 2015.

The Longhorns needed to beat second-place Strake Jesuit and Pearland in order to keep their playoff hopes alive, but they lost to the Crusaders 34-7 that ended their hopes to continue in the post-season.

There was no doubt as to the outcome of the game against Brazoswood as the Oilers jumped out to a quick 7-0 lead on their first possession of the game when quarterback J.D. Head found a wide-open Jaden Piece behind the Buccaneers secondary to complete a 40-yard scoring bomb with 9:45 remaining in the opening quarter.

The Oilers struck again at the 6:25 mark of the first period when Jaelin Benefield scored on an 8-yard run. Caleb Mendez nailed his second PAT giving Pearland a 14-0 advantage.

Just before the end of the first frame, Head tossed a short 1-yard scoring pass to Andrew Moore for a 21-0 lead with 1:52 left in the quarter.

Pearland would continue the offensive onslaught with 17 more unanswered points as Head fired a 26-yard scoring strike to Trevor Firmin; Benefield scored his second touchdown on a 1-yard plunge; and Mendez closed out the first half with a 22-yard field goal giving the Oilers a lopsided 38-0 lead at intermission.

Brazoswood showed some life to begin the second half when Eddie Woodruff found an opening in the Pearland defense to race 41-yards for a score to cut the lead to 38-7 with 10:43 left in the third.

But the Oilers would end any further offensive threat for the rest of the game while adding 17 more points in the second half.

Firmin caught a perfect 32-yard scoring strike from backup QB Layne Roblyer to answer the Brazoswood score for a 45-7 lead. Mendez would add his second field goal on a 25-yarder; and Spencer Smith would score on a 1-yard dive to post the 55-7 final score with 4:28 left in the game.

Pearland rolled up 574 total yards while the stingy Oiler defense limited the Bucs to only 180 total yards with only 27 yards rushing.

The single-season passing record for yards is also in Head’s grasp depending on how deep the Oilers go in the playoffs as Anderson also holds that mark with 2,898 yards.

Benefield had 12 carries for 87 yards and two scores while Torrence Burgess had 11 totes for 86 yards.

Piece had five catches for 134 yards and one score. Malcom Linton had four grabs for 61 and Firmin had two catches for 58 yards and two TDs. Moore had seven catches for 64 yards.

The Oilers can win the District 23-6A title outright on Friday, November 9 at 7:00 p.m. at Traylor Stadium when they face the George Ranch Longhorns.