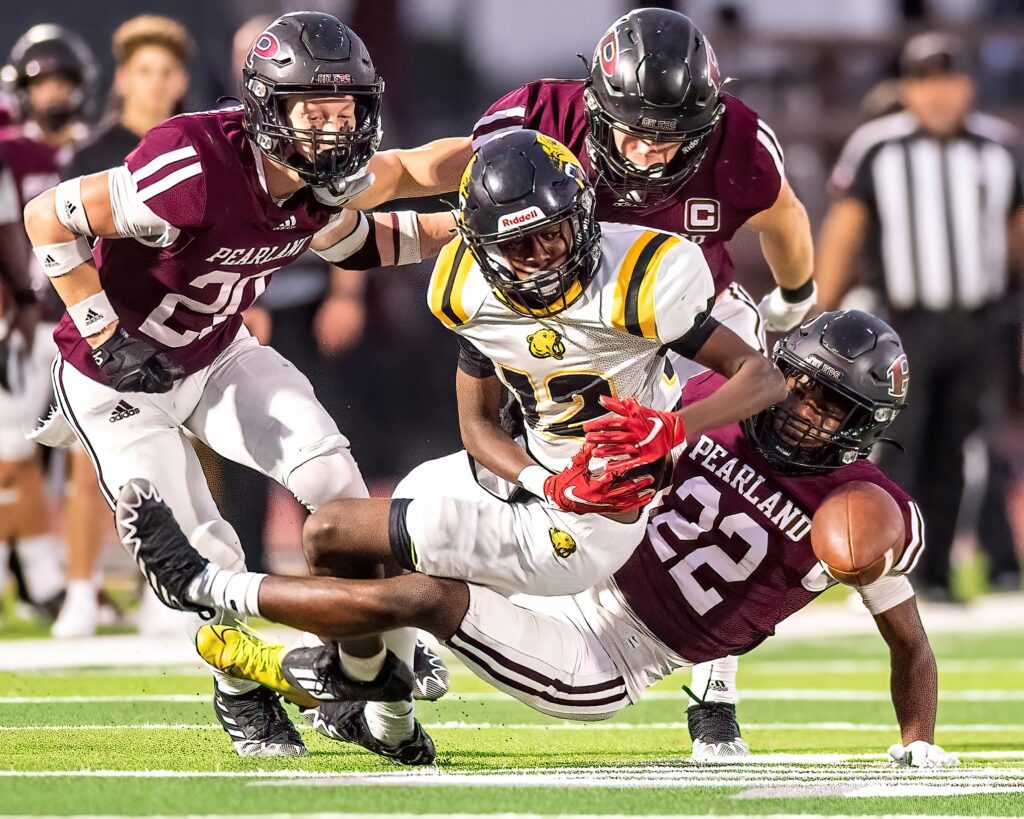 HASTINGS FUMBLES BALL - Pearland's Cole Anderson (20) and Lazarus Range (22) force a fumble by Hastings Omar Abdule (12) which was recovered by Range. The Oilers thrashed the Bears 59-7 in the final game of the regular season. Pearland (6-4) will face the Dickinson Gators (7-3) on Friday, November 11 at 7:00 p.m. in the 6A Region III Div I bi-district playoffs at The Rig. (Photo by Olyn Taylor)

It’s not how you begin but how you finish, and the Pearland Oilers finished the 2022 regular season with a 59-7 win over the Alief Hastings Bears for a 6-4 overall record. Now, the Oilers will ride into the Class 6A Region III Div I playoffs with a three-game winning streak and the post-season for the 23rd straight year.

Pearland will face the Dickinson Gators on Friday, November 11 at 7:00 p.m. in the 6A Region III Div I playoffs at The Rig.
The Oilers closed out the regular season under new head coach B.J. Gotte with a positive statement while building momentum in the next step of the season.

” I was very pleased with how we wrapped up the regular season with our best all-around performance,” Gotte said. “This season we have talked at length about controlling our ability to execute at a high level and play clean football in all three phases regardless of our opponent.”

Pearland did just that against Hastings in the blowout victory.

Hastings surprisingly scored with ease on the first possession of the game going 75-yards in seven-plays to score on an 8-yard run with 9:41 left in the first quarter for a 7-0 lead.

The Oilers would outscore the Bears 59-0 for the rest of the game.

It took Pearland only three plays to tie up the game as senior running back Kennedy Lewis went 59-yards on a scoring pass from QB Jackson Hamilton to even up the score 7-7 with 8:33 left in the opening period.

With 1:44 remaining in the first quarter, Pearland would score again as Lewis crossed the pay station on a 7-yard run to make the score 14-7.

At the beginning of the second quarter, Zander Winters would recover a Hastings fumble at the Bears 29 and the Oilers would score on a Hamilton 12-yard scoring pass to Evan Gracia with 8:19 left in the second quarter for a 21-0 advantage.

After the ensuing kickoff to the Bears, the Pearland defense would be back in the end zone as Jaden Wincher intercepted a pass and returned it 26-yards for a score with 7:14 left in the second frame for a 28-7 lead.

The Oilers would add one more score before the end of the first half when sophomore running back LaDamion McDowell would score on a five-yard scamper for a 35-7 halftime lead.

“I felt that after the first drive of the game, we settled in and played up to our capabilities,” Gotte said. “It was also a special night to get to see all of our seniors contribute on the field, because as a coach, you always love to see your players get excited for others on game night.”

The Oilers would score 24 more points in the second half in the 59-0 rout of the Bears.

Hamilton would throw two scoring passes to Patrick Bridges covering six-yards and then hit Christian Pitts on a 15-yard scoring toss to make the score 49-7 with 2:22 left in the third quarter.

Junior kicker Jackson Stagg, who hit 7-for-7 extra points for the game, booted a 34-yard field goal early in the fourth period to make the score 52-7.

The final Pearland score came on a 19-yard scoring pass from junior QB Cole Morkovsky to senior wide receiver Bryson O’Neal to put the finishing touches on the 59-7 final score.

McDowell had seven carries for 107 yards and one TD while Lewis had 49 yards on nine totes.

“We now move on to the third and final phase of our season, with a home playoff game vs. Dickinson,” Gotte said. “It is time for us to take the experiences and lessons learned throughout the season and use them to be at our best on Friday.”