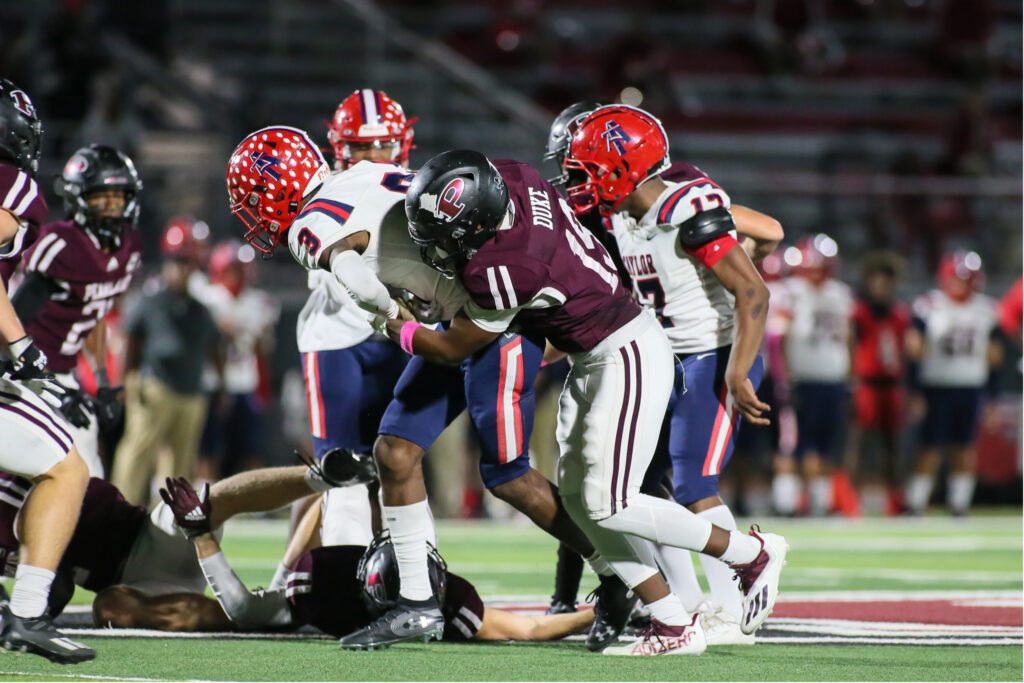 DEFENSIVE STOP - Pearland senior linebacker Andre Duke (19) sticks Alief Taylor wide receiver Bricen Brantley for a short gain. The Oilers held the Lions to minus -14 yards rushing for the game. Pearland beat Taylor 27-16 to even their season record to 4-4 and 3-2 in district to keep in the playoff hunt. Pearland will travel to face Strake Jesuit on Friday, October 28 at 7:00 p.m. at Crusader Stadium. (Photo by Lloyd Hendricks)

As the 2022 high school football season begins to wind down, local teams are jockeying for playoff positions in each district and the Pearland Oilers are no different at this stage of the season.

It was no secret that the Oilers football program was on a path of decline over the past few years and new head coach B.J. Gotte and his coaching staff have been faced with the task of rebuilding the culture of discipline and teamwork while competing on the playing field. And Pearland has improved in a great way this season in those areas. But those things take time.

“I was proud of how our kids battled for four quarters against a very athletic Alief Taylor team,” said Pearland head coach B.J. Gotte. “We played good complimentary team football in all three phases to put us in position to win the game.”

The Oilers are 4-4 overall this season with a 3-2 in the District 23-6A standings. They are in a three-way tie for third place with Alief Taylor and Strake Jesuit. The Oilers all but clinched their spot in the playoffs with their 27-16 win over Taylor.

Pearland has two league games remaining with Strake Jesuit (4-4, 3-2) and Alief Hastings (1-7, 1-4) and a win over Strake will punch their ticket to the post-season for the 23rd straight year.

It appeared that the Oilers would take firm control of the game against Taylor in the first quarter after taking an early 10-0 lead.

After the teams traded punts on their first two possessions, the Oilers began their second possession at their own 35.

It took seven plays for Pearland to go 65-yards for the score as sophomore quarterback Jackson Hamilton hit junior wide receiver Patrick Bridges on an 8-yard scoring toss with 4:43 left in the first quarter. The PAT was good by junior Jackson Stagg for the 7-0 lead.

The Pearland defense forced a Taylor punt to get the ball back at the Lions 39 following a poor punt.

The Oilers drove to the Taylor 16 before the offense stalled forcing a 33-yard field goal by Stagg with :23 seconds left in the period for a 10-0 advantage.

Taylor would take possession of the ensuing kickoff at their own 13 and go on a time-consuming 15-play, 87-yard scoring march capped off by a 35-yard scoring pass with 4:45 left in the second quarter to make the score 10-7. The drive took 7:45 off the game clock.

The Oilers got the ensuing kickoff and drove from their own 40 to the Taylor 41 in 12-plays but came up empty.

With only :12 seconds remaining in the opening half, Taylor got a big play deep in Pearland territory and managed to get a 45-yard field goal to tie up the game 10-10 at intermission.

Pearland got the second half kickoff, and it took only five plays for the Oilers to find the end zone as sophomore running back LaDamion McDowell scored on a 2-yard run. The PAT was good by Stagg and the Oiler reclaimed the lead 17-10 with 10:02 left in the third period.

After forcing a Taylor punt, Pearland’s Ashton Hampton gathered in the punt, followed good blocking by the Oilers and scored on a 63-yard punt return with 7:31 remaining in the third quarter. Stagg hit the PAT and the Oilers extended their lead to 24-10.

Taylor scored on their next possession, but Hampton came up with another standout play as he blocked the PAT leaving the Oilers with a 24-16 advantage with 3:14 remaining in the third frame.

Pearland would get a 30-yard field goal from Stagg late in the third to make the score 27-16 which would stand as the final score.

Hamilton finished the game hitting 10-of-18 passing for 118 yards and one score.

McDowell led the ground attack with 135 yards on 29 carries and one score while catching three passes for 13 yards.

Bridges caught six passes for 105 yards and one score.

Pearland’s defense held Taylor to minus 14 yards rushing and the Lions didn’t get a first down or cross into Oiler territory for the first quarter.

Pearland will travel to face Strake Jesuit on Friday, October 28 at 7:00 p.m. at Crusader Stadium.