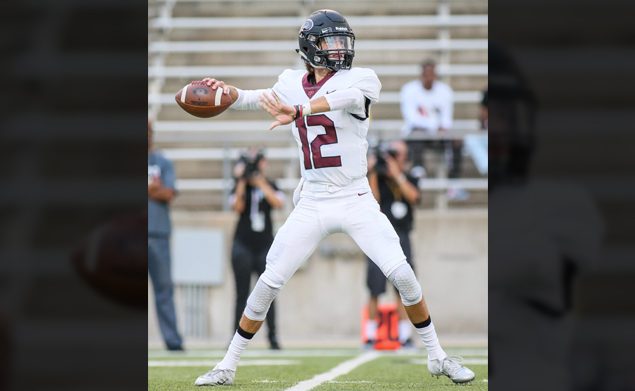 ON TARGET - New Pearland quarterback J.D. Head (12), who is an Oklahoma transfer, made a major statement in his first appearance in a Oilers' uniform when he hit 14-of-19 passing for 197 yards with one INT in leading the Oilers to a convincing 47-10 win over the Cy-Springs Panthers. Pearland will host Spring Branch Memorial on Friday, September 7 at 7:00 p.m. at The Rig. (Photo by Lloyd Hendricks)

The Pearland Oilers gave new head coach Ricky Tullos his first win wearing the Pearland “P” with a convincing 47-10 win over the Cy-Springs Panthers. And the score could have been worse.

It was no surprise that senior running back Jaelin Benefield emerged with a break out game as the speedster rushed seven times for 161 yards and three touchdowns including runs of 7, 32, and 71 yards to spot the Oilers to a 28-0 lead in the middle of the second quarter. Caleb Mendez booted four extra points.

The game also answered the question regarding new junior quarterback J.D. Head who recently moved to Pearland from Jones, Oklahoma. Head had an outstanding opening game for the Oilers as he was 14-of-19 passing for 197 yards with one INT. Backup QB Layne Roblyer was 4-for-7 passing for 84 yards and one TD.

“J.D. did a good job of running the offense,” Tullos said. “He made some good throws and good reads for his first game in a big stadium, big stage, big atmosphere.

“Layne also came in and made some good throws. The running game was pretty solid, too. Jaelin showed what he’s capable of doing.”

The Oilers broke on the scoreboard at the 2:49 mark of the opening period when Kelekolio Linton returned a punt for a 56-yard touchdown and a 7-0 lead.

Pearland added another score before the end of the first half when Landon Bradley scored on a 9-yard run to make the score 34-3 with 1:19 remaining in the second quarter. The two-point attempt came up short.

The only real offense that Cy-Springs would manage was with 4:14 left in the second period when Jose Morales booted a 30-yard field goal to cut the lead to 28-3.

The Oilers reached the end zone in the second half as Austin Landry caught a scoring pass covering 9-yards from Layne Roblyer to make the score 41-3 with 11:06 left in the fourth quarter. Mendez added the PAT.

Torrance Burgess scored the final touchdown for Pearland on a 9-yard run. The two-point conversion was no good which left Pearland with a 47-3 advantage with 7:02 left in the final period.

Cy-Springs scored a touchdown on a 15-yard run by Roman Anderson with only 2:07 left in the game to make the final score 47-10.

“I thought we did a good job of executing early and took control of the game, which was important. A lot of people touched the ball. We distributed it pretty well, and a lot of people got some experience out there, which was good,” Tullos said.

Pearland rolled up 526 total yards while the defense held the Panthers to 198 total yards with only 41 yards through the air. The Oilers had 22 first downs compared to 13 for Cy-Springs.

The Oilers will host Spring Branch Memorial on Friday, September 7 at 7:00 p.m. at The Rig.