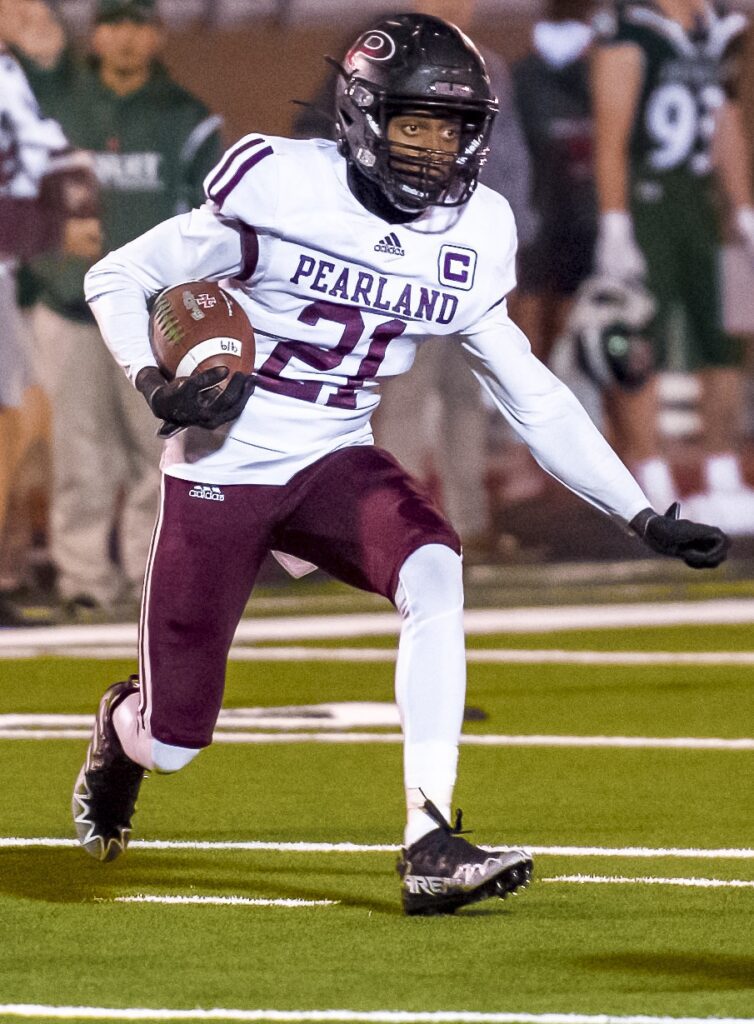 GREAT DEFENSIVE PLAY - Pearland's Gabriel Sheppard intercepts a Strake Jesuit pass and takes it for a short return in the third quarter. Pearland defeated the Crusaders 24-14 to advance to the playoffs for the 23rd consecutive year. The Oilers will host Hastings on Thursday, November 3 at 6:00 p.m.(Photo by Olyn Taylor)

Pearland got a much-needed win over Strake Jesuit to punch their ticket for the 23rd straight year to the post-season. The Oilers overcame some turnovers to get a 24-14 district win to improve to 5-4 overall and 4-2 in district.

New head coach B.J. Gotte has seen his team grow with each game this season.

“Overall, I was pleased with how we played in all three phases of the game,” Gotte said.

“Defensively we did a good job limiting the No. 1 ranked offense well below their average in yards and points. It was our most complete game on the defensive side of the ball.

Special teams wise, we handled the elements well and Jackson Stagg was able to make a late field goal into the wind to give us a two-score lead.”

Pearland’s defense held Strake Jesuit to 99 yards rushing and 66 yards through the air for a total of 185 yards and two scores.

The Oilers doubled the offensive output of Strake with 238 yards on the ground and 143 yards passing for a total of 381 yards and 24 points.

Both teams came up empty on offense after the opening quarter, but Pearland scored in the first minute of the second quarter when sophomore quarterback Jackson Hamiton tossed a screen pass to sophomore LaDamion McDowell who turned it into a 55-yard touchdown. Jackson Stagg added the PAT for the 7-0 lead.

Strake Jesuit answered the score in the second frame making the score 7-7.

With 1:12 left in the first half, McDowell took a handoff from Hamilton and raced around the right end for the Oilers second touchdown of the game to make the score 14-7 at intermission.

Strake scored in the third quarter to once again tie up the game 14-14, but the Pearland offense answered when Hamilton threw a 25-yard scoring pass to Evan Garcia to give the Oilers back the lead 21-14 with 9:56 left in the third period.

Pearland’s defense controlled the rest of the second half and the Oilers offense added a 28-yard field goal by Stagg with 6:31 remaining in the game to make the final score 24-14.

“I was proud of our offense for overcoming some early penalties and a costly turn over early in the second half to take control of the game late and keep the ball out of Strake’s hands in the final minutes,” Gotte said. “We are young on the offensive side of the ball but continue to find our identity while gaining quality experience.

“I am excited that our kids were able to earn a playoff spot last week and look forward to finishing off the regular season against an athletic Hastings team Thursday night.”

Hamilton was 8-for-15 passing for 143 yards and two touchdowns and two interceptions. He also rushed for 50 yards on seven carries.

McDowell led the ground attack with 126 yards on 26 totes and a score. He also caught three passes for 65 yards one TD.

Garcia had one catch for 25 yards and a TD. Patrick Bridges had two grabs for 24 yards. Gabe Ortiz had one reception for 22 yards.