Pearland falls to Dickinson 35-21 in bi-district 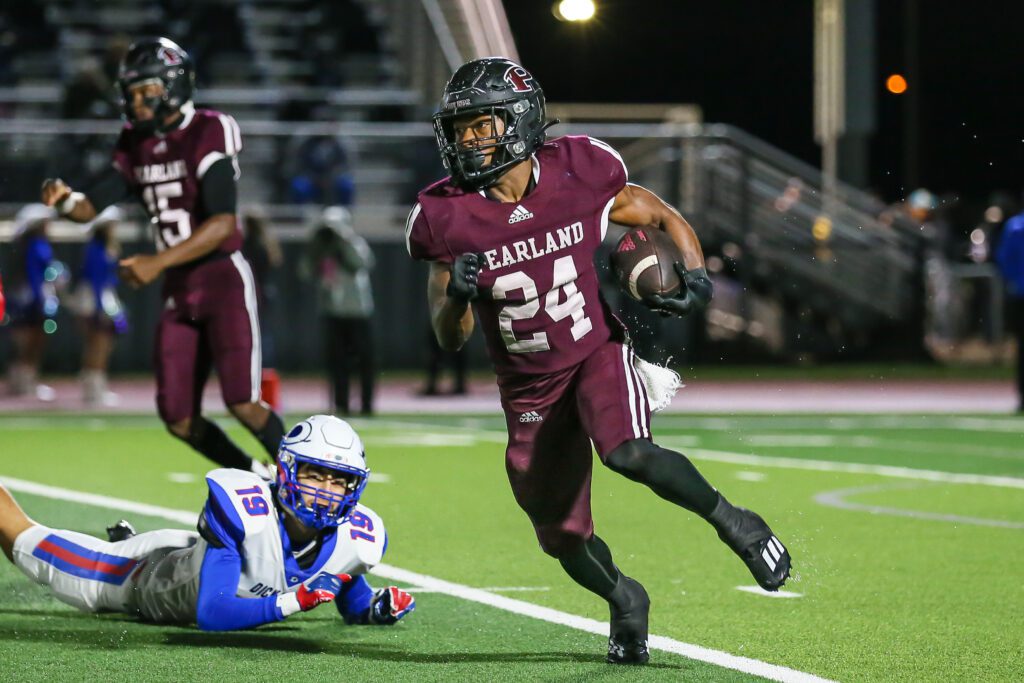 BRIGHT FUTURE - Pearland sophomore running back LaDamion McDowell (24) led the Oilers in rushing and has been a shining star this season. McDowell finished the 2022 football season with 801 yards on 151 carries and five touchdowns. He also had 204 yards receiving on 17 catches for two more scores. That gave him 1,005 total yards and seven TDs. (Photo by Lloyd Hendricks)

For the past 23 years, the Pearland Oilers have advanced to the post-season and new head coach B.J. Gotte certainly kept that tradition intact this season.

When a new coach takes over a football program, especially with the DNA that coach Gotte brought to Pearland that included four state championships as an assistant coach and one state title as a head coach, he knows that he must lay a foundation that will produce discipline and strong followship in the program that will lead a team to deep runs in the playoffs.

The 2022 football season proved to be a challenge of turning the Pearland program around to develop a mindset that had deteriorated over the past several years.

“I am very grateful for this senior class, who bought into our program and coaching staff from day one,” said coach Gotte. “Their buy in and belief in what we are building will be a key piece in our success moving forward.”

It was evident that the Oilers showed progress and growth as each game progressed this season which is what Gotte and his coaches needed to see.

Pearland faced Dickinson in the Class 6A Region III Div I bi-district round. The two teams have faced one another four times since 2014 and the Gators have won each time.

However, this year’s game proved to be much different, particularly over the last two times the Oilers played the Gators. Pearland actually had an opportunity to win this year.

But lack of experience proved costly though the Oilers certainly didn’t lack effort and desire.

“I am disappointed we were unable to put ourselves in position to win the game in the fourth quarter,” Gotte said. “But I am very proud of how our kids fought and battled against a very talented Dickinson team. At the end of the day when you turn the ball over and make costly mistakes in the playoffs, you will have a hard time coming away with a victory.”

Pearland got the opening kickoff and had trouble moving the ball against a very talented defense and were forced to punt the ball after getting only one first down.

The Gators set up at their own 40 following the punt and it took them only one play to score as QB John Solomon hit WR Marquis Johnson on a reverse flea flicker pass that went 60-yards for the score with 9:36 remaining in the first quarter.

On Pearland’s next possession, the Oilers threw an interception that set the Gators up at their own 48.

This time, the Dickinson offense went on an 11-play, 52-yard scoring drive capped off with a 3-yard keeper by Solomon. Chance Gage booted the PAT for a 14-0 lead with 5:36 left in the first period.

The game ended up being a defensive battle for most of the first half until there was three minutes remaining in the second quarter.

Dickinson was facing third and 12 from their own 25 when an errant pass was picked off by Pearland’s Ashton Hampton who returned it 34-yards for an Oiler touchdown to cut the lead to 14-7 following the PAT by Jackson Stagg.

The Gators got the ensuing kickoff at their own 39 and on the first play from scrimmage, running back Malachi McNair got loose on a 54-yard run to the Pearland 7.

Four plays later, Dickinson score to make the score 21-7 with :59 seconds left before the end of the first half.

But the never-say-die Oilers were going to give up as they set up at the Dickson 48.

On the first play, QB Jackson Hamilton hit junior wide receiver Evan Garcia on a beautiful pass for 21 yards to the Gator 27. Hamilton then found senior wide receiver Christian Pitts in the Dickinson end zone for a 27-yard scoring strike with :28 seconds left before intermission making the score 21-14.

Dickinson received the second half kickoff and drove to their 40 before Solomon threw another interception to Hampton, his second of the game.

The Oilers began at the Gator 42 and six plays later scored on a 27-yard pass from Hamilton to senior wide receiver Aiden Glasper. Staggs hit the PAT to tie up the game at 21-21 with 8:44 left in the third quarter.

The Pearland defense forced a punt by Dickinson and the Oiler offense set up at the Gator 42.

On second-and-four, Hamilton hit Patrick Bridges on a 29-yard pass to the Gator 7.

On third-and-goal, Hamilton threw a pass that was intercepted by the Dickinson defense to keep the Oilers from scoring and taking their first lead in the game.

Hamilton was 12-of-31 for 195 yards and two touchdowns while also throwing a pair of interceptions.

The Oilers could manage only 30 yards on 16 carries against a stout Dickinson squad.

Pitts had 86 yards receiving on 6 catches for one TD, Bridges had two grabs for 53 yards, and Glasper had two catches for 35 yards and a TD.

Pearland closes out the 2022 football campaign with a 6-5 mark overall and 5-2 in district.