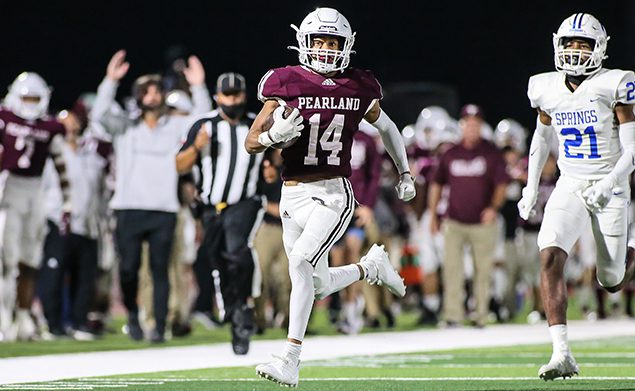 SCORING JAUNT - With the game tied 28-28 at halftime, Pearland wide receiver Christian Pitts (14) took the snap from center, weaved his way through the Clear Springs defense, and set sail for a crowd-pleasing 62-yard scoring jaunt on the first play of the second half to give the Oilers a 35-28 lead in the third quarter. The Chargers rallied in the fourth quarter to score twice to defeat Pearland 42-35 and end their season at 7-4 in the Class 6A Region III Div. I bi-district contest. (Photo by Lloyd Hendricks)

In a game that began like a track meet in the first quarter, the Class 6A Region III Div. I contest slowed down to a crawl in the second half and the Clear Springs Chargers outlasted the Pearland Oilers 42-35 to advance to the area round.

Both teams came out in the opening quarter on fire offensively as each scored three times in the first 12 minutes of the game.

Clear Springs began the game at their own 41 and took four-plays to go 59-yards to score on a 32-yard pass from QB Cody Kuhlmann to WR Noah Thomas for a 7-0 lead with 9:51 left in the opening quarter.

Pearland responded quickly with a 35-yard run by junior WR Christian Pitts to move from the 50 to the Chargers 15. Dominic Serna scored on a 1-yard plunge to complete the four-play, 50-yard drive to knot up the score 7-7 with 8:24 left in the first period.

It took only 1:13 for Clear Springs find the end zone, this time it was a 49-yard pass from Kuhlmann to Thomas giving the Chargers a 14-7 lead with 7:13 left in the first quarter.

Once again, the Oilers came out firing to go on a five-play, 75-yard scoring march that resulted in a 29-yard run by Izeal Jones around right end for the score to tie up the game at 14-14 with 5:44 left in the opening stanza.

The fireworks continued as Clear Springs took their third lead of the game on a 30-yard touchdown pass from Kuhlmann to Hayden Davis at the 2:35 mark of the first quarter for a 21-14 lead.

Pearland began at their 34-yard following the ensuing kickoff and it took only three plays as junior running back Kennedy Lewis broke through the center of the Chargers defense for a crowd-pleasing 36-yard scoring romp to tie up the game 21-21 with 2:35 left in the frame.

After the teams traded fumbles, Pearland went on a 14-play, 52-yard drive that was capped off by a 3-yard scoring toss from QB Jake Sock to Nathan Elias with 8:09 left in the second quarter giving the Oilers a 28-21 advantage.

Clear Springs answered with a 12-play, 62-yard scoring march that took almost five minutes resulting in a 5-yard scoring pass from Kuhlmann to Thomas to tie up the game 28-28 that stood as the first half score.

The second half began like the first half as Pearland began their first possession on their own 38-yard line.

Pitts took the direct snap and weaved his way through the Clear Springs defense for a sensational 62-yard scoring jaunt to give the Oilers a quick 35-28 lead following the PAT by Jackson Stagg, his fifth of the night, with 11:42 left in the third quarter.

The two teams traded punts and then Dylan Dixson intercepted a Clear Springs pass only to see the offense fumble the ball back to the Chargers on the first offensive play.

Neither team could score for the rest of the third quarter that ended with Pearland leading 35-28.

Clear Springs took over the fourth quarter while Pearland’s offense sputtered throughout the final period.

The Pearland defense spent most of the last period on the field as the Chargers scored two times to pull out the playoff win.

The game-tying drive by Clear Springs took a 13-play, 64-yard scoring march as Kuhlmann hit Thomas on a 3-yard scoring toss to knot up the score 35-35.

The scoring drive took 5:29 off the game clock as the Chargers scored with 11:51 left in the fourth quarter.

Once again, the two teams traded punts with the Chargers starting their game-winning drive at the Pearland 27 after the Oilers had to punt from deep in their own endzone.

The seeds for the Chargers’ game-winning touchdown drive were planted by a beauty of a Peyton Miller punt that pinned the Oilers on their own 2-yard line, and a subsequent defensive stand followed by a short punt, set Clear Springs’ offense up at the Pearland 27-yard line.

Clear Springs used a 6-play, 27-yard drive to score the winning touchdown with 5:36 left in the game as Kuhlmann found the pay station on a 1-yard keeper to give the Chargers a 42-35 lead which is the way the game ended.

Unfortunately, for Pearland, the Oilers’ offense completely disappeared in the second half following the score by Pitts on the first play.

For the past four years, the Oilers are now 1-4 in the post-season while Pearland has lost the opening round of the playoffs for the past three out of four years.

Pitts had eight catches for 67 yards while Jones had three grabs for 30 yards.

Pearland ends the 2021 football season with a 7-4 record while finishing second in the District 23-6A standings at 6-1.