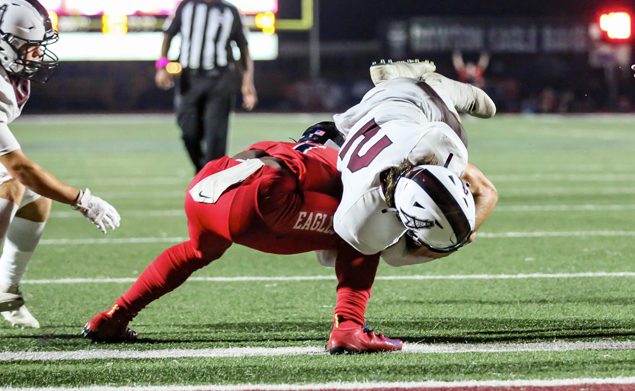 DIVING INTO THE END ZONE - Pearland senior quarterback J.D. Head found the end zone for a 4-yard touchdown against Dawson in the PearBowl cutting the lead to 37-29 with 9:50 remaining in the fourth quarter. A 32-yard field goal by Carter Brown put the Eagles ahead 40-29 with 1:54 left in the game which stood at the final buzzer. Dawson's win ties up the series 3-3 since both schools began playing in the same district in 2014. (Photo by Lloyd Hendricks)

There are teams that have talent, but when they play together as one heartbeat — then they become unstoppable and overcome all odds to experience great success.

Prior to the 2019 season, Pearland was picked to repeat as District 23-6A champions while Dawson was selected to finish fourth with both teams still picked to advance to the post-season.

The previous week, Dawson faced Strake Jesuit who was a pre-season pick to finish second in the district race. The Eagles took them out 21-17.

Now, Dawson is sitting atop the 23-6A leaderboard with a very strong shot at capturing the 23-6A crown after knocking off the Pearland Oilers in the annual PearBowl 40-29. This evens their series at 3-3 since the two cross-town cousins began playing one another in the same district beginning in 2014.

With the win, Dawson head coach Mike Allison will do his best to not let his team look any further than their next opponent and stress taking care of business one game at a time.

“I’m proud of the kids and the coaching staff,” Allison said. “We’ve got some special kids at Dawson and it showed in this game. We man not have the most talented players on the field, but I think we’re pretty dang good. We’re strong because of the unity.”

For Pearland, the Oilers are going to have to re-group as they continue their quest through the district schedule.

Dawson struck first when Bobby Wooden scored on a 2-yard plunge with 4:51 left in the opening period. Carter Brown tacked on the extra point for a 7-0 lead to complete the nine-play, 84-yard scoring march. The key play in the drive was a 44-yard hookup from QB Myles Kitt-Denton to Jake Brinkman to the Pearland 10 to set up the touchdown by Wooden.

It didn’t take long for Pearland to answer as they used a 77-yard, nine-play drive to even the score on a 2-yard pass from quarterback J.D. Head to Jeremiah Aaron on a sensational catch in the corner of the end zone. Caleb Mendez booted the PAT to knot up the score 7-7 with 1:34 remaining in the first quarter.

Dawson took the ensuing kickoff on a drive from their 32-yard line to the Pearland 28 where the drive stalled. Allison turned to kicker Carter Brown who tied his Dawson school record with his second 45-yard field goal to give the Eagles a 10-7 advantage at the 11:02 mark of the second quarter.

The Eagles defense forced Pearland to punt and began their next possession at their own 14. The Eagles took 12-plays to drive 86-yards to move ahead to 17-7 with 4:25 remaining before halftime.

Once again, it was Kitt-Denton to Brinkman that was the key play while Wooden added a 17-yard run.

Facing fourth-and-goal from the Oilers 1-yard line, Kitt-Denton took the shotgun snap, rolled right and simply out ran the Pearland defenders to the left corner of the pay station for the score.

Dawson’s defense took over the rest of the period leaving the Eagles with a 17-7 lead at intermission.

The Eagles took control of the second half with two more scores as Wooden caught a 20-yard scoring strike from Kitt-Denton with 8:28 left in the third for a 23-7 lead followed by a missed PAT and then Ja’Den Stewart scoring on a 2-yard plunge at the 4:25 mark of the third frame for a 30-7 advantage.

Pearland finally found some new energy as they rallied with a pair of scores as Brandon Campbell scored on a 6-yard run and Head fired a 61-yard pass across the middle to a streaking Aaron who went the distance to cut the lead to 30-22 with 11:34 still left in the final period.

But the Eagles had a big play up their sleeve as Kitt-Denton and Wooden hooked up with a Dawson crowd-pleasing 70-yard scoring bomb that took the breath out of the Oilers giving Dawson a 37-22 lead with 10:39 left in the fourth.

However, the Oilers weren’t going to give up as got the ensuing kickoff on their own 49. A pass from Head to Campbell covering 28-yards placed the ball on the Dawson 23. A 19-yard run by Campbell to the Eagles 4 set up a Head quarterback keeper for a touchdown with 9:50 left in the game. Mendez hit the PAT cutting the lead to 37-29.

But that would be as close as the Oilers would get as Dawson drove the ball to the Pearland 15 and settled for a Carter Brown 32-yard field goal with 3:54 remaining making the score 40-29.

Pearland would once again would make an urgent attempt to score quickly, but a Head pass was intercepted by Dawson’s Chandler Henry that would seal the win for the Eagles.

Torrence Burgess had nine carries for 89 yards while Campbell had 14 totes for 67 yards and one score. Campbell also had one catch for 28 yards.

Aaron had seven catches for 183 yards and one TD. Jaden Piece had six grabs for 37 yards.

Kitt-Denton was 13-of-23 passing for 302 yards and two TDs while picking up 91 yards on the ground on 14 carries and one score.

Wooden had six catches for 164 yards and two touchdowns while rushing for 101 yards on 10 totes and one score.

Stewart had 19 carries for 48 yards and one score.

Brinkman had two catches for 85 yards to set up two scores. Alex Boudreaux had three grabs for 39 yards.