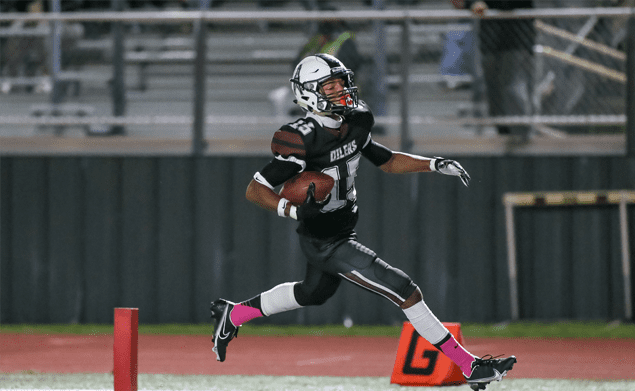 PEARLAND TOUCHDOWN - Pearland wide receiver William Foster scores on a 46-yard pass from QB Jake Sock to give the Oilers a 6-3 lead over Dawson with 3:40 left in the first half. The PAT was blocked leaving the score at 6-3. The Eagles rallied in the second half to win the annual Bayway Chevrolet PearBowl 17-6 for the second consecutive year. Dawson has a 4-3 edge in the series. (Photo by Lloyd Hendricks)

For the second straight year, the Dawson Eagles were able to prevail over cross-town cousin Pearland 17-6 to win the Bayway Chevrolet PearBowl Trophy. The trophy will return to Dawson High School for another year.

Both teams entered the game with 3-0 records for the 2020 season and the series tied 3-3 between the two schools.

Dawson was a slight underdog because senior quarterback James Kramer went down with a knee injury last week, plus Dawson head coach Mike Allison was being quarantined due to exposure to COVID-19 as well as defensive line coach Mike Garcia for the same reason.

Allison turned his team over to his veteran offensive coordinator Ryan Silvertooth who did a superb job of rallying the troops and leading the Eagles to the win.

“I’m so excited for these kids, with everything they’ve been through, all the uncertainty, and the off-season getting cut short,” Silvertooth said. “I’m so proud of the way these kids have worked. Their resiliency, the adversity and they know how to bounce back from it – it’s a true family.”

The Eagles have now won four of the last five meetings against Pearland with the Oilers last win coming in 2018 when they played at the University of Houston’s TDECU Stadium.

Dawson was playing without starting quarterback senior James Kramer who hurt his knee against Alief Hastings in the 52-0 blowout.

But Silvertooth put sophomore quarterback Colin Johnson in charge of the offense and he responded with a solid showing with his limited experience.

“I probably didn’t put him (Johnson) in the best of situations in the first half but all-in-all he played well,” Silvertooth said. “At halftime, he was down a little bit, but after talking to him, he had all the confidence in the world, his teammates picked him up, and he made a clutch throw in the third quarter on that touchdown drive.”

Dawson scored first on a 43-yard field goal by All-State junior placekicker Carter Brown with 4:29 left in the opening quarter. The score was set up after Pearland booted a short 12-yard punt that gave the Eagles the ball at the Oilers 35.

The defenses controlled most of the first half until the Oilers finally put together a 10-play, 95-yard drive capped off by a 46-yard touchdown pass from junior quarterback Jake Sock to wide receiver William Foster. The PAT was blocked by Dawson senior Jonah Ladet leaving the Oilers with a 6-3 lead with 3:40 left in the second period which stood at halftime.

That would be the last time the Oilers would score as the Dawson defense limited No. 12 Pearland (3-1, 1-1) to 48 yards after halftime, and 189 for the game, thanks to relentless pressure on QB Jake Sock that produced four sacks, including two by Cameron Whitfield.

“Our defense played their tails off all night long,” Silvertooth said.

Meanwhile, Dawson scored two more times on their first possession of the second half when senior running back Ja’Den Stewart scored on a 1-yard plunge with 2:43 left in the third quarter to give the Eagles a 10-6 lead following the PAT by Carter.

With 2:37 left in the game, Blake Smith completed the final eight-play, 80-yard drive of the game for the Eagles with a 2-yard run on fourth down to drive the nail in the coffin. Carter booted the PAT and the final score was posted 17-6 as the Dawson fans began to celebrate.

Stewart finished the game for Dawson with 98 yards on 22 rushes and one TD.

Torrence Burgess had 14 totes for 63 yards.

Johnson was 5-of-10 passing for 55-yards and three interceptions.

Pearland will travel to Crump Stadium on Friday, October 23 at 7:00 p.m. to face the Alief Elsik Lions.