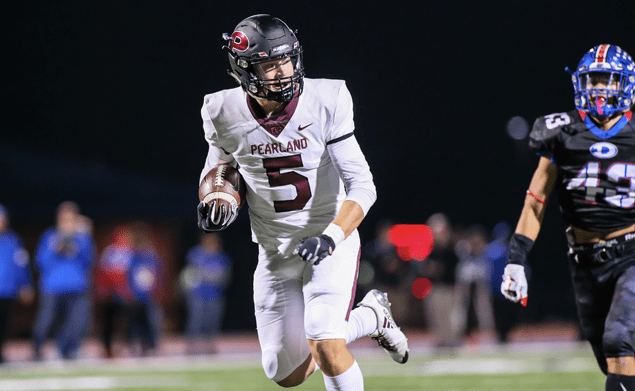 CATCH AND RUN TOUCHDOWN - Facing fourth-and-8, Pearland senior Layne Roblyer (5) catches a pass from QB J.D. Head and turns it into a 37-yard score with 9:03 remaining in the second period while giving the Oilers a 14-9 lead against Dickinson. The Gators eliminated the Oiler 28-23 from the Class 6A Region III Div. I bi-district contest. Pearland finishes the season with an 8-3 mark. (Photo by Lloyd Hendricks)

The game went back and forth with miscues from both teams, but in the end, the Dickinson Gators would pull out a 28-23 win over the Pearland Oilers in the Class 6A Region III Div. I bi-district round of the playoffs.

It is the second straight year that the Gators have eliminated the Oilers from the post-season. Last year, the game wasn’t as close 49-21.

Mistakes haunted both teams, but one of the main differences was that the Oilers lost two fumbles while Dickinson didn’t lose any.

The first fumble for Pearland happened on the opening kickoff which was recovered at the Oilers 29. Six plays later resulted in a 5-yard quarterback keeper by senior Mike Welch. However, the PAT missed the mark leaving the Gators with a 6-0 lead at the 10:16 mark of the first period.

Pearland got the ensuing kickoff at their own 25 and promptly moved the ball 75-yards in six plays capped off by a 25-yard scoring pass from quarterback J.D. Head to Jeremiah Aaron. Pearland placekicker Caleb Mendez made sure he converted the PAT giving his team a 7-6 lead with 8:56 left in the opening period.

After the Pearland defense forced a Dickinson punt, the Oilers were on the move again driving deep in Gator territory. Torrence Burgess took the handoff at the 10 and it appeared he was on his way to the goal line when he lost the ball at the three-yard line. The ball bounced in the end zone which was recovered by D.J. Warnell who had also recovered the opening kickoff.

But the Oilers would retake the lead on a 15-play, 87-yard drive capped off by a Head to Layne Roblyer 37-yard touchdown pass on fourth down and eight, giving Pearland a 14-9 lead with 9:03 left in the second quarter.

Dickinson controlled the rest of the second quarter scoring twice as Welch threw a 12-yard pass to Kai German making the score 15-14. The two-point conversion pass was intercepted by Pearland.

The Gators scored again with :43 before intermission on a 1-yard Welch keeper to increase the lead to 22-14 after the PAT was good.

Pearland battled back in the third quarter to score nine points to retake the lead 23-22.

Mendez booted a 31-yard field goal after a 13-play drive stalled at the Gators 14-yard line with 5:58 remaining in the third quarter making the score 22-17.

Later in the period, Pearland would score again on a 3-yard run by Brandon Campbell, but the two-point conversion attempt was unsuccessful leaving the Oilers in front 23-22 at the end of the third quarter.

Both teams continued to battle on defense until Dickinson scored on a strange play. Deep in Pearland territory, Ausaru Allah broke free for a 7-yard touchdown, but before he crossed the goal line, the ball slipped out of his hands into the arms of teammate Darryl Harris who took it into the pay station for the touchdown.

The failed two-point run was no good, but Dickinson had a 28-23 lead with 6:32 left in the final period.

The Oilers were unable to threaten and the Gators ran out the clock to get the win and advance to the area round of the post-season.

Burgess led the ground attack with 17 carries for 111 yards while Campbell had 16 carries for 91 yards and one touchdown.

Cedric Mitchell had three grabs for 64 yards while Jeremiah Aaron had four catches for 63 yards and one score.

Pearland closes out the 2019 season with an 8-3 record while Dickinson improves to 10-1.