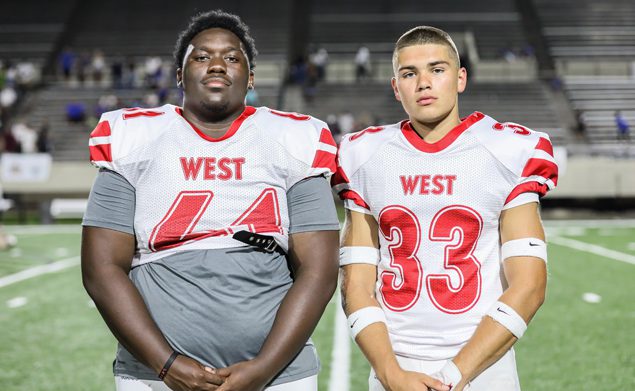 The Bayou Bowl, featuring players from Texas vs Louisiana, competed from 2003 to 2013. Following the 2013 contest, the Louisiana High School Coaches Association decided they didn’t want to continue the event thus ending the Bayou Bowl between the two states.

In order to continue the Bayou Bowl, the Greater Houston Football Coaches Association decided they would pit the Houston players in a revised contest between the East vs West of some of the Houston area football standouts.

Selected on the West team for Pearland was Lawrence Clark and Caleb Mendez.

Clark was a District 23-6A first-team pick at guard and hasn’t decided on where he might continue his education and possible playing career at the next level.

“Clark had a fantastic senior year playing offensive line for us after transitioning from defensive line,” said Pearland head coach Ricky Tullos. “He played with a tremendous amount of size, strength, and effort. He will make a huge impact on the college of choice when he decides.”

Mendez has chosen the University of Houston to continue his education and playing career after hitting 30-of-36 PATs and 6-of-8 FGs with his longest of 40 yards last season.

“Caleb was a three-year starter for us,” Tullos said. “Caleb has worked extremely hard every day as our kicker and it was a joy to have him in our program. He is a leader on and off the field and has a passion to be successful at what he does.”

The East Team entered this year’s contest trailing the series 5-1, but that all changed as the East defeated the West 13-11 in a close game.

The East found pay dirt on the game’s opening possession with Baytown Lee QB Christian Olige sparking the drive on a 42-yard run to help set up a 2-yard touchdown run by Klein Collins’ Jonathan Lewis for a 6-0 lead after an unsuccessful extra-point try.

Later in the first quarter, Pearland kicker Caleb Mendez split the uprights on a 34-yard field goal to trim the East’s lead in half, 6-3.

The teams stayed mired in a defensive struggle until midway through the third quarter when Baytown Lee’s Ja’Kenan Davis (11 carries, 106 yards) broke free for a 90-yard TD run and a 13-3 lead.

Early in the fourth quarter, the West scored its lone TD on a trick play with a halfback pass from Houston Heights’ Kendic Rhymes finding Katy Morton Ranch receiver JerMichael Johnson for a 13-yard score. A successful two-point conversion accounted for the final tally leaving the West trailing 13-11 which stood as the final score.