No. 4 Pearland punches ticket to the playoffs with win over Hastings 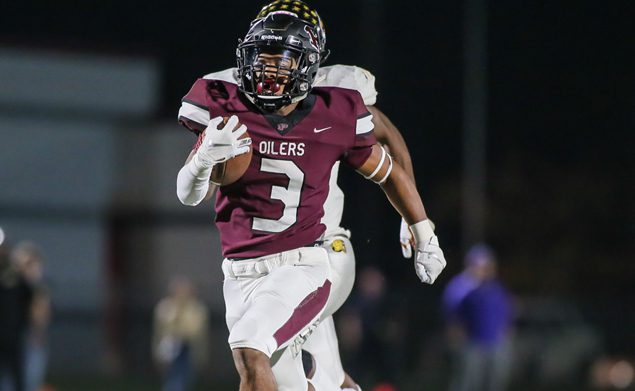 TOUCHDOWN BOUND - Pearland sophomore Torrence Burgess (3) broke through a huge hole provided by the Oiler offensive line and raced 59-yards for a scoring jaunt giving Pearland a 7-0 lead. The Oilers went on to a lopsided 41-7 win over the Hastings Bears to remain undefeated at 8-0. (Photo by Lloyd Hendricks)

For the 19th straight year, the Pearland Oilers will advance to the post-season with aspirations of making a deep run in the playoffs for a second state championship.

But the focus of the season has always been one game at a time under new head coach Ricky Tullos and that philosophy hasn’t changed at all. Tullos continues to stress to his team that it is one game at a time and the rest will take care of itself.

The Oilers have divided the season into three steps and they are near achieving the first step and that is becoming the District 23-6A champion. Currently, Pearland is 5-0 and atop the league standing with two games to go against Brazoswood and George Ranch. The Oilers should take care of both of these teams to close out the season at 10-0 with step one complete.

The second step is to win the Class 6A Div. I title which will be an even greater test while step three is finishing the season at AT&T Stadium in Arlington with a 6A state championship.

Those are the long-term goals of the Oilers, but reality is to take care of business against Brazoswood this coming Friday, November 2 at The Rig at 7:00 p.m.

The Buccaneers would love to beat the Oilers on their own home turf, but if Pearland plays like they have this season, then the Oilers should easily take care of business against a team that is 1-7 overall and 1-4 in district. This is Brazoswood’s playoff game since their season will end at the end of their regular schedule.

The Oilers got started a little slow against Hastings, but once they got untracked and operating on all cylinders, there was never a question as to the outcome of this important league contest that keeps Pearland sitting at the top of the leaderboard.

With 2:05 left in the opening quarter, Pearland scored their first touchdown when sophomore Torrence Burgess got loose up the middle of the Hastings defense for a 59-yard scoring jaunt to take a 7-0 lead following the PAT by Caleb Mendez.

That began the domino effect when the Oilers scored on their next two possessions when Pearland scored on a 62-yard, nine-play drive capped off with a 1-yard plunge by all-purpose athlete Austin Landry. The Mendez PAT hit the mark for a 14-0 lead.

The key plays on the drive was when quarterback J.D. Head hit running back Jaelin Benefield on a 24-yard strike and then Benefield got loose on a 25-yard jaunt to the Hastings 2-yard line setting up the Landry score with 11:03 left in the second period.

The next quick score by the Oilers came at the 9:04 mark when Landry added his 12th touchdown of the year on a 1-yard push across the Hastings goal line for a 21-0 lead following another Mendez PAT.

Pearland would add three more scores in less than four minutes thanks to an aggressive and alert Oiler defense.

The Oilers got the ball at the 50 and three-plays later were back in the end zone thanks to a crowd-pleasing 38-yard scoring dash by Benefield to make the score 28-0 with 3:40 left before halftime.

Pearland junior defensive back Brenden Stokes stepped in front of a Hastings receiver for an interception giving the Oilers the ball back at the Pearland 24 with 2:43 left before intermission.

The Oilers went back to work and took eight plays to find the pay station when Head hit Landry on a beautiful 27-yard scoring strike to push the lead to 35-0 with the PAT by Mendez.

Following the ensuing kickoff, Hasting fumbled the snap at their own 27 which was recovered by the Oilers with 37 seconds left on the clock.

With just a few seconds left in the first half, Head calmly dropped a perfect pass in the back of the end zone to an open Jaden Peace as time expired. The snap was bobbled on the PAT leaving the Oilers with a 41-0 halftime advantage.

That was all the scoring the Oilers needed to win the game as Hastings managed a score in the second half against the Pearland reserves making the final results 41-7.

Pearland rolled up 414 total yards while limiting Hastings to only 226 yards with most of that in the second half.

Head continued his outstanding performance as he was 15-of-28 passing for 177 yards and two scores. The field general now has 1,768 passing yards with 20 touchdown passes and only five INTs for the season.

Landry had 1 catch for 27 yards and a TD. He also had two carries for two yards and two more scores. The all-purpose athlete has 150 yards rushing on the season on 12 totes and seven TDs. Landry leads the Oilers in receiving with 564 yards on 31 grabs and six scores.

Malcom Linton had four catches against Hastings for 60 yards while Andrew Moore also had four grabs for 34 yards. William Hiers had two catches for 44 yards and Benefield had three receptions for 38 yards.

Pearland will host the Brazoswood Buccaneers on Friday, November 2 at The Rig at 7:00 p.m. in their final home game of the regular season. A win will assure the Oilers of at least a share of the District 23-6A title.