Oilers rally for a 57-42 win over Strake Jesuit 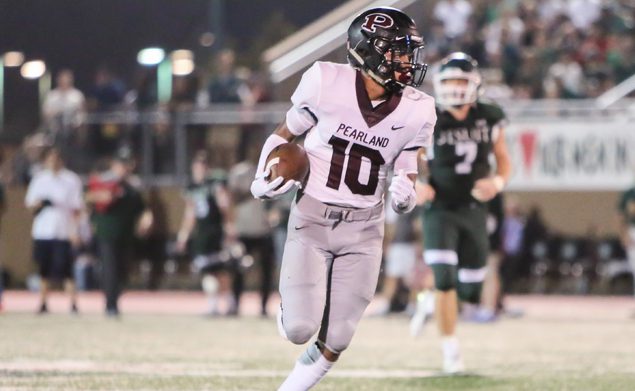 MR. ALL-PURPOSE - Austin Landry (10) had five carries for 125 yards and scored four times while also catching two passes for 73 yards. Landry also did double duty on defense as he was called upon to help on Strake Jesuit’s top receiver. Landry had three pass breakups and two tackles holding Strake’s best receiver to no catches when he was on the field. Landry's 95-yard scoring run with 4:49 remaining was the clincher as Pearland rallied to defeat Strake Jesuit 57-42 to improve to 7-0 on the season. (Photo by Lloyd Hendricks)

You don’t know the true mettle of a team until you see how they play when their back is against the wall. Such was the case when the No. 5 area-ranked Pearland Oilers were down 21-0 to No. 10 area-ranked and district foe Strake Jesuit in the opening quarter at Clay Stadium.

It was a battle between two undefeated teams playing for the top spot in the District 23-6A standings and avoiding their first loss of the season.

The game suffered a lightening delay and a torrential downpour leaving both teams, not only battling one another, but also the weather elements.

But in the end, the Oilers would overcome the 21-0 deficit and explode for to a 57-42 district win to remain perfect on the season at 7-0 and all alone atop the league leaderboard at 4-0. Strake Jesuit drops to 6-1 and second-place at 3-1.

“I’m very proud of our kids,” said Pearland head coach Ricky Tullos. “Adversity is not defeat and there is going to be times when your back is against the wall and you have to respond. We knew we had to come out strong after the rain delay and they did that.”

Never in Pearland’s history have the Oilers been down 21-0 and come back to win the game. In fact, this is the most points scored in a single-game by Pearland and an opponent which totaled 99 points (57-42).

With a 21-point deficit staring the Oilers in the face late in the first quarter, Pearland accepted the challenge and began their determination to get back in the game in the second quarter as they scored 14-points to cut the margin to 21-14 before the Crusaders scored again to double the margin to 28-14.

But the Oilers weren’t going away and at this point in the game, Pearland rallied to even up the game at 28-28 at intermission with the 28-point second quarter.

The third quarter belonged to the Oilers as they outscore Strake Jesuit 22-0 to turn the tables for a 50-28 advantage.

The Oilers would add one more score in the final frame while the Crusaders would add a couple of scores, but it wasn’t enough as Pearland completed their most impressive comeback in their football history.

The cast for the Oilers was impressive as senior running back Jaelin Benefield put the team on his shoulders with 26 carries for 288 yards on the ground and three touchdowns with his longest run from scrimmage being 59 yards.

Of course the offensive line deserves all the credit for the protection they provided Head and the huge holes they opened for Benefield and Landry. Senior linemen Sincere Haynesworth, Jaret Porterfield and Brayden McKinney are all three-year starters on the offensive line.

Quarterback J.D. Head certainly did his part in terrible weather conditions as he was 8-of-15 for 188 yards and one score and one interception.

Mr. All-Purpose Austin Landry had five carries for 125 yards and scored four times while also catching two passes for 73 yards. Landry also did double duty on defense as he was called upon to help on Strake Jesuit’s top receiver. Landry had three pass breakups and two tackles holding Strake’s best receiver to no catches when he was on the field.

Landry’s 95-yard scoring run with 4:49 remaining was the clincher.

Jaden Piece also was instrumental in the come back with two catches for 78 yards and one score. Piece caught a deflected pass from Head and ran the remaining 48 yards, completing a 67-yard touchdown pass.

Pearland improves to 7-0 overall and 4-0 in district. The Oilers are now in the driver’s seat to capture the 23-6A title, but Tullos won’t let them look beyond their next opponent.

It has been a learning process for the Oilers this season especially the previous games they had to reach within to rally and win.

“Early in the season, we wavered a little bit and that was a big learning tool,” Tullos said. “Against Strake Jesuit, we were able to utilize that experience.”