Pearland falls to Memorial 17-14 in OT 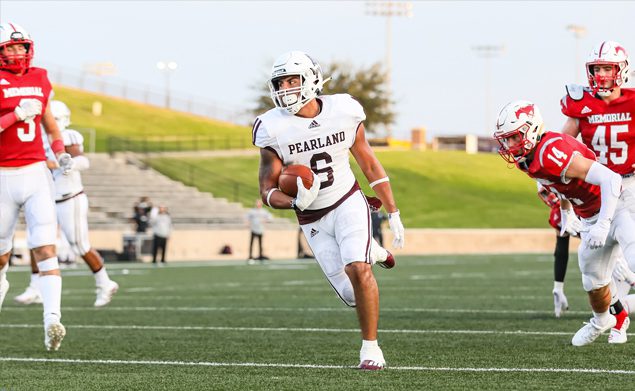 TOUCHDOWN RUNS - Pearland senior running back Dominic Serna (6) scored twice on runs of 14 and 52-yards against Spring Branch Memorial, but it wasn't enough as the Mustangs rallied to win the game 17-14 in overtime. Serna had 29 carries for 150 yards and two TDs. The Oilers (0-2) will host the Oak Ridge War Eagles on Friday, September 10 at 7:00 p.m. at The Rig. (Photo by Lloyd Hendricks)

Pearland and Memorial have been playing each other for a long time and the Oilers entered their game against the Mustangs holding a 13-2 advantage in their series.

The Mustangs won back-to-back games in 2011 and 2012, but the Oilers have dominated their series with many of the games being close.

The two teams faced one another at Tully Stadium last Friday and it looked like Pearland had control early with a 14-0 lead in the first half. But Memorial has always put up a fight and they did so again as they pulled out a 17-14 win in overtime to hand the Oilers their second straight loss to start the 2021 season at 0-2.

The last time Pearland lost their first two games in a season was in 1997.

The Oilers built a 14-0 lead in the first half thanks to two scoring runs by Dominic Serna.

With 2:19 left in the opening quarter, Serna scored on a 14-yard run for a 7-0 lead following the PAT by Jackson Stagg. The scoring dash completed a 7-play, 44-yard drive.

Serna scored again when he got loose on a 52-yard scoring run with 4:23 left in the second period. Stagg was on target with the PAT and the Oilers took a 14-0 lead into the dressing room at halftime.

The Mustangs got on the scoreboard in the fourth quarter with 5:05 left in the game.

After driving to the Oiler 5-yard line, Memorial settled for a Kenne 22-yard field goal making the score 14-6.

Memorial turned to their defense to continue to shutout Pearland’s ineffective offense in the second half and got the break they were looking for when Marshall Bregenzer blocked an Oiler punt, picked up the ball and raced in from 10-yards out to make the score 14-12 with 3:12 remaining in the non-district game.

The Mustangs went for the two-point conversion to tie up the game and were successful when Chase Goodwin hit Trent Posell on a slant pass to knot up the game at 14-14 which is the way the game ended to force overtime.

Memorial won the coin toss in overtime and let Pearland be on offense first so they would know what they needed to do when they got on offense.

The Oilers couldn’t move the ball and turned the ball over on downs to let the Mustangs have their turn on offense.

Memorial got the ball to the Pearland three-yard line and opted to kick a 10-yard field goal by Kenne to take the come-from-behind win 17-14.

Serna led the Oilers ground attack with 150 yards on 27 carries for two TDs.

QB Jake Sock was 8-for-19 passing while Isaac Sanchez had five catches for 29 yards.

Pearland will host the Oak Ridge War Eagles on Friday, September 10 at 7:00 p.m. at The Rig.