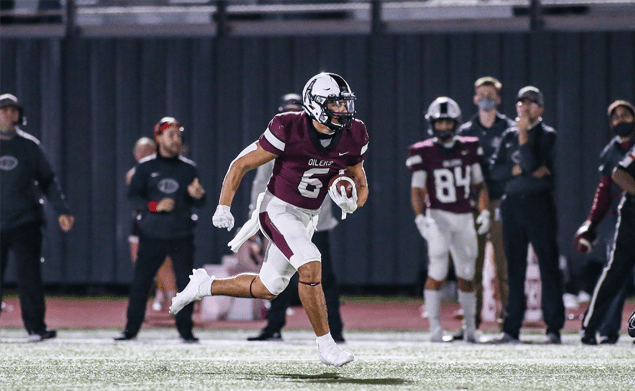 SCORING JAUNT - Pearland junior RB Dominic Serna (6) is on his way to a 75-yard scoring jaunt against Alief Hastings. Serna finished the game with 121 yards rushing on nine carries. Serna scored just before the first half ended giving the Oilers a 30-0 lead. Pearland went on to a 37-16 Homecoming victory. Pearland (6-1) will travel to Freedom Field to face the Shadow Creek Sharks in a District 23-6A showdown on Friday, November 13 at 7:00 p.m. (Photo by Lloyd Hendricks)

In what was a tight game after the first twelve minutes of play with Pearland leading the Alief Hastings Bears 7-0 thanks to an interception by Malik Williams covering 8-yards for the score with 4:05 left in the period, the Oilers went on a 23-0 scoring spree in the second quarter to take a 30-0 lead at intermission.

Pearland went on to post a 37-16 Homecoming win over the Bears in the District 23-6A contest. The win improves Pearland to 6-1 overall and 4-1 in the league standings.

The Oilers scored again with 11:31 left in the second quarter when junior QB Jake Sock plunged across the goal line on a 1-yard sneak. Caleb Mendez added the PAT and the Oilers were up 14-0.

After Pearland got a safety for a 16-0 lead at the 3:48 mark, Kele Linton stuck the knife in a little deeper by taking the ensuing kickoff 65-yards for the score with 3:37 left in the period for a 23-0 advantage.

As the first half was coming to an end, Pearland got the ball back after the Bears missed a 42-yard field goal attempt with 1:08 showing on the first half clock.

With the ball at the Pearland 25, junior running back Dominic Serna took the ball from Sock, found a hole in the Bears defense, and turned on the jets for a crowd-pleasing 75-yard score and a 30-0 halftime lead following the PAT by Mendez.

The Oilers added a scoring pass from Sock to Garret Coiner covering 8-yards with 1:20 left in the third quarter. Mendez tacked on the final PAT for the Oilers and a 37-7 lead.

Hastings score once in the third period and added a safety, a touchdown, and a two-point conversion in the fourth period after the Oilers had wrapped up the game 37-16.

Sock was 4-of-14 passing for 41 yards and one TD and one interception.

William Foster had one catch for 22 yards.

Pearland (6-1) will travel to Freedom Field to face the Shadow Creek Sharks in a District 23-6A showdown on Friday, November 13 at 7:00 p.m.