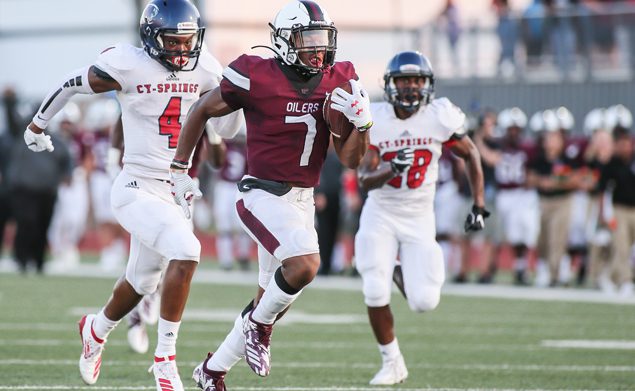 TURNING ON THE JETS - New move-in, junior RB Brandon Campbell, a four-star recruit, scored on his first carry as an Oiler. Campbell turned on the jets and burst through a hole for a 55-yard scoring jaunt with 4:28 still left in the first period giving Pearland a 28-0 lead. (Photo by Lloyd Hendricks)

The game between Pearland and Cy-Springs was almost over before it ever began as the Oilers scored 14 points before the first three minutes were gone in the opening quarter.

Pearland kicked off and stopped the Panthers on their own 3-yard line. On the next play, Cy-Springs fumbled the ball in their own end zone which was recovered by Pearland’s Christopher Salinas with 13 seconds gone in the game giving Pearland a quick 7-0 lead following the PAT by Caleb Mendez.

Cy-Springs fumbled on their next possession which was recovered by Christian Sauter at the Panthers 29.

It took Pearland seven plays to score as Torrence Burgess carried the ball on four of the plays capped off with a 3-yard bolt across the goal line making the score 14-0 with 9:24 left in the first quarter following the PAT by Mendez.

Pearland’s defense forced the Panthers to punt on their next possession after five plays.

The punt found the waiting arms of Jeremiah Aaron, a new move in for the Oilers this year, and he promptly set sail to the end zone on a crowd-pleasing 73-yard punt return for a touchdown making the score 21-0 after the extra point found the mark by Mendez.

Cy-Springs went three-and-out giving the Oilers their next possession at their own 45.

On the first play, QB J.D. Head handed the ball to another new move-in, junior Brandon Campbell, a four-star recruit, who promptly turned on the jets and burst through a hole for a 55-yard scoring jaunt with 4:28 still left in the first period. Mendez booted the extra point making the score 28-0.

The Oilers increased the lead to 35-0 on a 49-yard scoring run by Burgess for his second touchdown of the game.

Cy-Springs finally got on the scoreboard with 1:09 left in the first half with a 23-yard field goal making the score 35-3.

But the Oilers weren’t finished as they scored with :22 seconds left before intermission on a beautiful pass play from Head to Trey Wilson covering 55-yards. Mendez hit his sixth PAT for a 42-3 lead at halftime.

It was more of the same in the second half as the Oilers added another touchdown by Campbell on a 1-yard plunge and the night was capped off with a 29-yard Mendez field goal making the final 52-3.

Trey Wilson had one catch for 55 yards and a score. Tanner Tullos had three grabs for 55 yards.

Pearland had 535 total yards while Cy-Springs was held to 144 yards including only four yards passing.