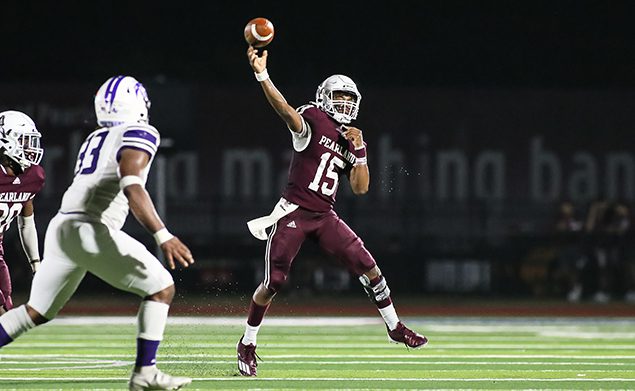 Pearland freshman QB Jackson Hamilton threw his first high school TD pass when both teams went to the bench in the 4th quarter. With good arm strength and excellent running ability, Hamilton shows a lot of promise for the Oilers' future. (Photo by Lloyd Hendricks)

With great anticipation, Pearland kicked off the 2021 football season against a tough Fort Bend Ridge Point team at The Rig with high hopes of getting a win. Unfortunately, the Oilers faced a very talented and experienced team who took advantage of several Pearland miscues to come away with a convincing 41-13 win.

The Panthers took the opening possession of the game 62-yards in 12-plays for a one-yard plunge by running back Ezell Jolly with 6:25 left in the first quarter for a 7-0 lead.

Pearland began their first possession of the game at their own 38 and on the second play, senior QB Jack Sock was pressured by the Panther defense and threw an errant pass that was intercepted by Ridge Point at the Pearland 40.

The Panthers scored in five plays as Jolly scored on a two-yard run with 3:33 left in the first period for a 14-0 lead.

With 1:08 left in the opening quarter, the Panthers would score on a punt return where they fumbled the punt which was recovered and fumbled by the Oilers back to the Panthers who turned it into a 66-yard return for a touchdown to make the score 20-0 after the missed extra point.

Ridge Point would add one more score in the second quarter when Marvin Session would score on a 67-yard fumble return giving the Panthers a 27-0 halftime advantage.

Pearland tried to get back in the game as the Oilers scored on a screen pass from QB Jake Sock to WR Isaac Sanchez at the start of the third frame. The play took only eight seconds off the clock to make the score 27-6 with 11:42 left in the third.

Ridge Point would score 14 unanswered points in the third quarter to make the score 41-6 before freshman QB Jackson Hamilton was inserted into the Pearland offense in the fourth period where he tossed a 9-yard scoring pass to Evan Wells to cut the final margin to 41-13 following the extra point by Jaden Downs.

Turnovers and the lack of offense played a role in the loss to the Panthers as the Oilers only had 96-yards rushing and 97-yards passing with one interception and two lost fumbles.

Ridge Point had 226 yards on the ground and 142 yards passing.

Pearland RB Denzel Lartey had three carries for 39 yards and Hamilton had four totes for 27 yards to lead the ground attack.

Pearland looks to get on the winning track on Friday, September 3 when they travel to Tully Stadium to face the Spring Branch Memorial Mustangs at 7:00 p.m.