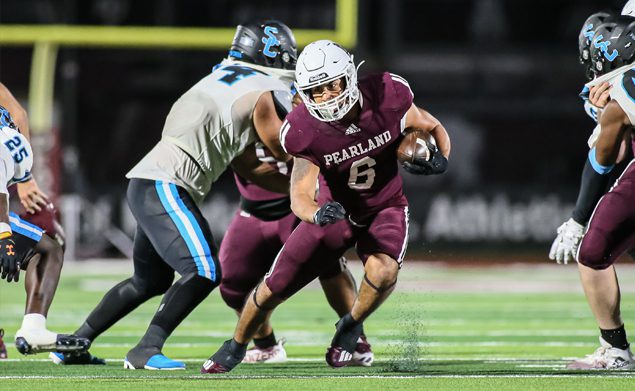 LOOKING FOR RUNNING ROOM - Pearland senior running back Dominic Serna scored three touchdowns against Shadow Creek while picking up 79 yards on 17 carries. The Oilers came up short against the Sharks 34-27. Pearland faces cross-town cousin Dawson in the PearBowl on Thursday, November 4 at 7:00 p.m. at Pearland ISD Stadium. (Photo by Lloyd Hendricks)

Pearland and Shadow Creek have both punched their ticket to the 2021 post-season, but there was more at stake in this game as the Oilers and Sharks were playing for the District 23-6A championship.

Both teams will be the No. 1 seed from the district when the playoffs begin as Pearland will be the top seed in the Div. I bracket while the Sharks will be No. 1 in Div. II.

But this game was more about pride and the league title as both entered the district contest with 5-0 records.

As predicted, this game wasn’t decided until late in the final quarter.

It appeared that Shadow Creek might run away with the game as they jumped out to a 14-0 first quarter lead on the running of Tylik Burton who scored the second touchdown as the first quarter came to an end thanks to a crowd-pleasing 72-yard scoring jaunt.

The Sharks got on the board at the 2:25 mark of the opening period on a 10-yard scoring toss from QB Duke Butler to Lawrence Armstrong for the 7-0 lead. The score completed an impressive 12-play, 75-yard drive.

However, Pearland responded with a big play of their own to get on the scoreboard as QB Jake Sock hit WR Christian Pitts on a 51-yard pass completion to set up the Oilers at the Shark 2.

Pearland would score on the next play as Kennedy Lewis cross the goal line on a 2-yard plunge to cut the margin to 14-7 following the PAT by Jackson Stagg.

Shadow Creek went on another time consuming, 11-play drive, but the Oilers defense stiffened to force a 40-yard field goal by Matt Allison after the drive stalled at the Pearland 23 making the score 17-7.

With 6:12 left in the second quarter, Pearland used a 7-play, 66-yard scoring drive that was capped off with a 1-yard score by Dominic Serna. The PAT was good and the Oilers cut the lead to 17-14 at intermission.

Both team suffered interceptions before halftime as Sock was intercepted by Shadow Creek’s Dylan Hughes at the Sharks’ 34, but Pearland returned the favor with a pick at the Oilers’ 25 by Ashton Hampton.

Shadow Creek got the second half kickoff and proceeded to go on a 10-play, 59-yard scoring march that ended with a 9-yard scoring run by Burton giving the Sharks a 23-14 advantage following the missed PAT.

But Pearland took the ensuing kickoff on a 9-play, 50-yard scoring march of their own capped off with a 5-yard scoring run by Serna with 4:10 left in the third period to cut the lead to 23-21.

The Sharks would respond with a 60-yard, 10-play drive that stalled at the Pearland 9 and Shadow Creek had to settle for a 26-yard field goal by Allison making the score 26-21.

The Oilers took the ensuing kickoff 75-yards in 7-plays to score on a 2-yard run by Serna. The PAT was good by Stagg and Pearland had battled back to take a 27-26 lead with 8:57 left in the fourth quarter.

It didn’t take long for the Sharks to take back the lead as Burton got loose on a 42-yard scamper on the Shadow Creek sideline for the big touchdown that would turn out to be the game-winner 34-27 with 7:39 left in the fourth.

With 7:34 left in the game, Pearland went on a 13-play, 63-yard drive that stalled at the Shadow Creek 18 when Sock misfired on a fourth down pass allowing the Sharks to get the ball back with 2:07 remaining in the game.

The Sharks hit a long pass deep in Pearland territory and they opted to let the clock run out to get the win.

Burton had 233 yards rushing on 21 carries and three TDs.

Butler was 10-of-19 passing for one score and had one INT.

Jo’Qwan West had three catches for 33 yards and Jacorey Watson had one grab for 27 yards. Armstrong had one catch for 10 yards and a TD.

Serna had 17 carries for 79 yards and three TDs. Sock had nine totes for 48 yards while Lewis had seven carries for 33 yards.

Pitts had three catches for 62 yards while Izeal Jones had three grabs for 57 yards.

Shadow Creek will close out the regular season at home against Alief Hastings on Friday, November 5 at 7:00 p.m. at Freedom Field.

Pearland will finish the regular season against cross-town cousin Dawson on Thursday, November 4 at 7:00 p.m. at Pearland ISD Stadium. The Oilers and the Eagles have both punched their ticket to the post-season.