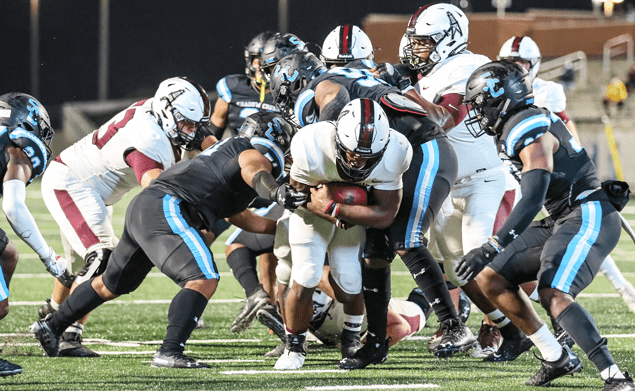 TOUGH TD RUN - Pearland senior RB Darius Hale found the end zone on a 5-yard run against Shadow Creek to give the Oilers an early 6-0 lead. That would be the last score for Pearland as the Sharks went on to a 20-6 district win. Pearland is now 6-2 on the season and 4-2 in league action. Shadow Creek improved to 4-2 overall and 4-0 in the league standings. Pearland will host the winless Alvin Yellowjackets on Friday, November 20 at The Rig at 7:00 p.m. (Photo by Lloyd Hendricks)

The much anticipated game between Pearland and Shadow Creek didn’t produce the kind of offensive fireworks as anticipated, but turned into a defensive struggle, especially in the second half.

All the points were scored in the first half for both team with the Oilers getting a touchdown following a Shadow Creek turnover that was set up by a fumble on a punt return.

After the Oilers had to punt on their opening possession, the Sharks fumbled the punt which was recovered by Pearland at the Shadow Creek 10.

It only took two plays for the Oilers to punch it in the end zone as senior running back Darius Hale carried the ball for a five-yard gain and then scored on a five yard run on second down. The PAT hit the right upright and the Oilers had a 6-0 lead with 8:31 left in the first quarter.

That would be all the scoring that the Oilers could muster against a fast and aggressive Shadow Creek defense that limited Pearland to only 54 yards in the first half that included minus-3 passing.

Pearland did drive the ball close to the Sharks goal line but had to settle for a field goal attempt that hooked left leaving the Oilers with their six points.

After the Oilers scored following the turnover, Shadow Creek answered quickly on their first quarter possession as All-State QB Kyron Drones found wide receiver C.J. Guidry about 15 yards behind the Pearland secondary wide open to complete an 80-yard scoring bomb. The PAT bounced off the upright leaving the teams tied 6-6.

After a three-and-out, Shadow Creek forced a Pearland punt that traveled only 15 yards. The Sharks moved the ball to the Oilers 18 where Drones handed the ball to junior RB Kelvon Brown on a sweep to the left. The elusive runner found a small hole that resulted in an 18-yard scoring run. The PAT found the mark and Shadow Creek had a 13-0 lead at the end of the opening stanza.

With 5:56, Shadow started their next possession at their own 27. Drones tossed a short pass to Greg Hancock, who broke a couple of attempted tackles, and then turn on the jets down the sideline to out run six Pearland defenders to the goal line for a touchdown. The PAT was good and the Sharks had a 20-6 lead at halftime.

As it would turn out, that would be all the scoring for both teams.

Drones finished the game hitting 5-of-17 passing for 194 yards and two TDs and one INT.

Brown had 102 yards rushing on 22 carries and one score.

Hancock had 92 yards receiving on two grabs and one score while Guidry had 80 yards on one catch for a TD.

Pearland did get a late interception to thwart another Shadow Creek scoring threat, but the game would end with the Sharks prevailing 20-6 to remain unbeaten in district play.

Pearland junior QB Jake Sock was 7-of-16 passing for 34 yards.

Junior RB Dominic Serna was the leading ball carrier with 18 carries for 84 yards. Senior RB Darius Hale had nine totes for 33 yards and one score.

William Foster had two catches for 17 yards and Isaac Sanchez had two grabs for 11 yards while Garrett Coiner had one catch for 11 yards.