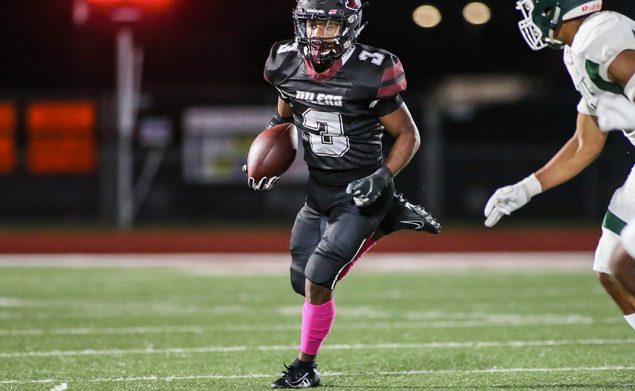 LEADING RUSHER - Pearland junior running back Torrence Burgess (3) looks to gain some yards against Strake Jesuit. Burgess finished the game with 16 carries for 81 yards and one score. The Oilers led 14-0 early in the second half but Strake Jesuit scored 21 unanswered points to pull out the district win 21-14. Strake improves to 5-2 overall and 3-1 in district while the Oilers drop to 5-2 on the season and 2-2 in league play. Pearland will travel to Crump Stadium on Friday, October 25 to face the Alief Hastings Bears at 7:00 p.m. (Photo by Lloyd Hendricks)

At the start of the season, Pearland and Strake Jesuit were pre-season No. 1 and No. 2 picks to compete for the District 23-6A title.

However, Dawson changed that scenario with a victory over both teams to sit atop the district leaderboard after beating George Ranch to remain perfect at 4-0 and in the driver’s seat for the district crown.

The Oilers and Crusaders entered the game with 2-1 district marks with the two teams looking to stay in playoff contention with George Ranch.

Pearland hosted Strake Jesuit for their Homecoming celebration, but it was the Crusaders who spoiled the party with a 21-14 win at The Rig.

Strake Jesuit is a ball-control team and every possession is important.

The Crusaders got the opening kickoff and drove the ball to the Pearland 13-yard line when the drive stalled forcing Strake to settle for a 30-yard field goal attempt which came up short for no points.

Pearland began their first possession of the game at their own 13 and proceeded to drive the ball 87-yards in 15-plays as Torrence Burgess scored on a 2-yard run. Caleb Mendez drilled the PAT giving the Oilers a 7-0 lead with 11:25 left in the second quarter.

The Oilers limited the Crusaders to get one first down before forcing them to punt on their next possession.

Pearland began their second possession of the game on their own 20. The ground attack controlled the next drive as the Oilers used 11-plays to place the ball at the Strake Jesuit 28-yard line.

Facing fourth-and-11, the Oilers chose to go for a first down instead of attempting a 45-yard field goal. The fourth down pass was incomplete to halt the possible scoring opportunity.

The Crusaders took over at their own 28 with 4:33 remaining in the first half.

A 25-yard pass completion from QB William Dickason to WR Jack Shanklin placed the ball at the Pearland 47.

Strake Jesuit kept the ball on the ground and reached the Oilers 30. On fourth-and-six with just seconds before intermission, Dickason launched a pass to the end zone that was intercepted by Jeremiah Aaron who made an incredible catch to end the first half with Pearland clinging to a 7-0 lead.

The Oilers got the second half kickoff and began their drive at their own 30.

Pearland took 13-plays to drive 70-yards for a touchdown as Brandon Campbell burst through a hole in the middle of the Strake Jesuit defense for a 15-yard score. Mendez hit the PAT and the Oilers had a 14-0 advantage with 8:19 left in the third quarter.

That would be the last score for the Oilers as the Strake Jesuit shut down the Pearland offense. The closest the Oilers could get to the Crusaders goal line for the rest of the game was the Strake 43 on their second possession of the second half.

Meanwhile, the Crusaders offense controlled the rest of the game as they scored on a 17-yard run by Dickason to conclude a 67-yard, five-play drive with 6:46 left in the third period to cut the lead to 14-7.

After Pearland was forced to punt after four plays, the Crusaders began their next drive at their own 16. On the third play, RB Dylan Campbell burst through a huge hole and raced 72-yards for a touchdown to tie up the game 14-14 with 3:20 remaining in the third quarter.

Pearland was forced to punt again setting up the Crusaders at their own 42. After a first down, Dickason fumbled after running to the Pearland 19 which was recovered by the Oilers at their own 19.

But the offense failed to move the ball and the Crusaders defense forced another punt that traveled only 15 yards.

It took Strake Jesuit just a little over two minutes to drive 34-yards in six plays as Campbell tossed a halfback pass to Robert Smith for a 6-yard touchdown with 6:39 left in the game giving the Crusaders a 21-14 lead.

Pearland was forced to punt the ball on their next possession and Strake took over at their own 20 with 5:29 left in the district contest. Strake kept possession of the ball for the remainder of the game and the Oilers never had another opportunity to score.

The Oilers were playing the game without starting quarterback J.D. Head, but backup QB Lane Roblyer did an outstanding job in directing the offense.

Pearland drops to 5-2 on the season and 2-2 in district while Strake improves to 5-2 overall and 3-1 in league play. The Oilers are now fourth in the district standings at 2-2 while Dawson has sole possession of the top spot at 4-0 while Strake Jesuit and George Ranch are tied for second at 3-1.